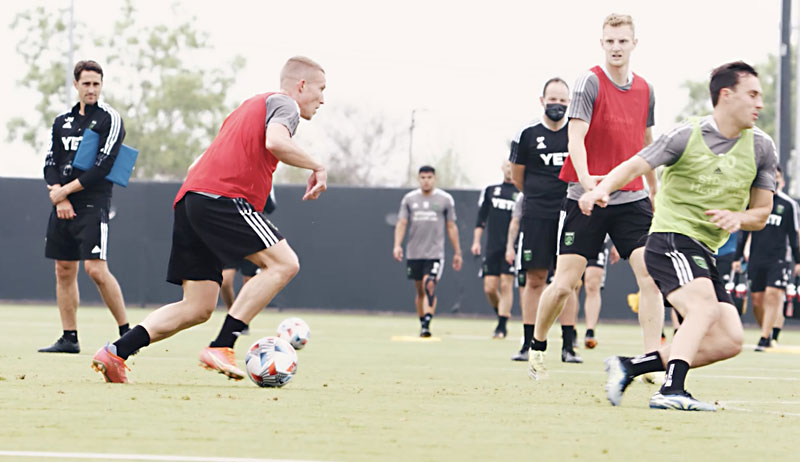 Austin FC head coach Josh Wolff (left) looks on with approval as his players implement his brand of soccer in training. (Courtesy of Austin FC)

Saturday night, for the second time in as many weeks, Austin FC laid siege to a rival MLS home ground and plundered all three points in convincing fashion. The victims this go-round, Minnesota United, had no answer for the Verde's first half dominance of possession or second half defensive organization. One Diego Fagundez goal off a masterful cross by Jared Stroud on the right wing proved to be the difference as the Texas team triumphed 1-0 and shot up into a virtual tie for second place in the Western Conference standings through three games. Frustrated Loons fans exiting Allianz Field were left to ponder the same question many in Central Texas were excitedly asking themselves:

How about what the numbers say? ATXFC has out-possessed its opponent in all three matches, by an average of 54% to 46%, which is exactly how head coach Josh Wolff likes it. His club has scored four goals and conceded three, though ATXFC trails slightly in expected goals (a statistic that assigns a fraction of a goal to each attacking chance based on the probability it results in a score) 4.7 to 5.1. That suggests the Verde has benefited from some good fortune – specifically, opponents not capitalizing on chances they have created – though Austin starting goalkeeper Brad Stuver deserves some credit there.

Okay, but what do they say? I asked Wolff, how good is your team, really? "That's kind of an odd question. We're just trying to get better every week," he said, like a coach that's been doing this much longer than he has. Though, he did offer, "Our ability to have some level of consistency on both sides of the ball has been really good." Club captain and MVP-so-far Alex Ring also weighed in after the victory in St. Paul. "Picking up results and doing it mostly in the style we want to do it ... it shows that we're doing things right."

And finally, what does "The Verde Report" say? This is the part where I remind you, dear reader, that we are only three games into a season of 34 and eventually one of the Fightin' Oak Trees' older MLS brothers – possibly Sporting Kansas City this Sunday, 6:30pm, on FS1 – will knock them down a peg. But two things are clear enough through three games. First, Austin FC's roster is deep and lacks a glaring weakness. Second, the players have learned and adapted to Wolff's style of play faster than anyone could have reasonably expected. So yes, the Verde has plenty going for it at the moment.

On Sunday, center back Matt Besler will play his first match against Sporting KC, the club for whom he debuted as a 22-year-old and spent the first 12 seasons of his career, serving as captain for over half of those years. Soon, Besler's name will be embossed onto the walls of Children's Mercy Park next to that of his new manager's. Wolff, who scored 43 goals for the Kansas City franchise then known as the Wizards, was named a "Sporting Legend" in 2019.

Vista Ridge H.S. (Cedar Park) and Lonestar Soccer Club graduate Khiry Shelton has started every game for SKC this season and provides pace and passing ability on the right wing. He's expressed excitement for MLS's presence in Austin and says he's looking forward to eventually playing on the road in his hometown. 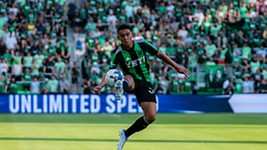