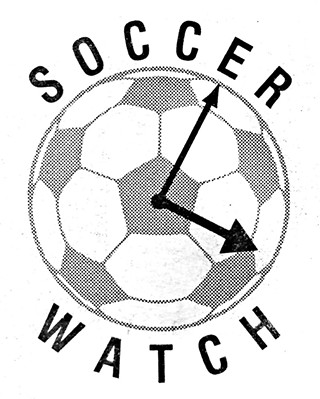 I started writing this column in the fall of 1989, and the first line was, "It's okay. I know you're not interested in soccer."

I had been frustrated all summer at not being able to find any info about qualifying matches for the 1990 World Cup. No news outlets covered it, no standings were available, even for the U.S. group, let alone Europe or the rest of the world. The U.S. hadn't qualified for the finals in 40 years, but they might do so now; yet as they faced a must-win away game in the last stage, ESPN bumped the broadcast without warning for a monster truck race.

But there was a newsstand on the drag where I could get three-day-old copies of The Times from London, plus I had a friend at UT who smuggled me reams of paper print-outs from the rec.sports.soccer news group on this new info-sharing thing he could get on his computer called the Usenet. (It later evolved into the internet, which is still in use today.) And eventually I figured, if I was already going to all that trouble, I might as well make some of that research public, in case there were others out there feeling equally bereft.

Those early columns were heavy on raw data: game scores, group standings, and news nuggets from around the world. I tried to give readers a taste of the socio-political significance the game takes on in various parts of the world – how the Yugoslavian breakup gets replayed in Red Star Belgrade games, why Nelson Mandela held his first post-prison rally in a soccer stadium, the latest anti-Catholic songs coming out of Ibrox Stadium in Glasgow ... and that's been a theme right up through Barcelona's role in the Catalunyan secession movement, and Shakhtar Donetsk's isolation during Russia's annexation of Crimea.

The top level of American soccer in 1989 was probably the indoor NISL, and if there was a local scene beyond youth leagues and rec sports, I didn't know about it. But things changed over the years. The U.S. qualified for that 1990 World Cup, and the six after that. In 1993, UT got an NCAA women's team, MLS was founded, and ESPN2 went up, signaling a boom in sports broadcasting. Watch parties were no longer solitary affairs at Fadó sports bar, which was privy to some esoteric international feed that no one else got. The U.S. Women's 1999 WC win was an inspiration (in so many ways). And here in Austin, as the city grew, and soccer's popularity grew, a succession of minor league teams came and went, each one setting the bar a little higher – from amateur to semi-pro to full professional ...

I've been told this is the longest-running soccer column in the nation, and I've been reading Mr. Smarty Pants long enough to know not to look a gift fact in the mouth, so I'll accept that title. But its purpose is done, I think. All that information I dug so hard for is now available at a click; MLS and international soccer are now part of the mainstream sports culture; and Austin has a Major League Soccer team (!!!). So I'm going to declare victory and get outta here (though I may be back from time to time, probably as World Cup Watch, a moniker the column morphed into at times over the years). And starting next week we'll debut The Verde Report, a new weekly feature by Eric Goodman giving you a look inside Austin FC as we count down the days (23 as of today) until Austin becomes officially a major league city.

At press time, Austin FC just released their 2021 schedule; find it at austinchronicle.com/austin-fc.