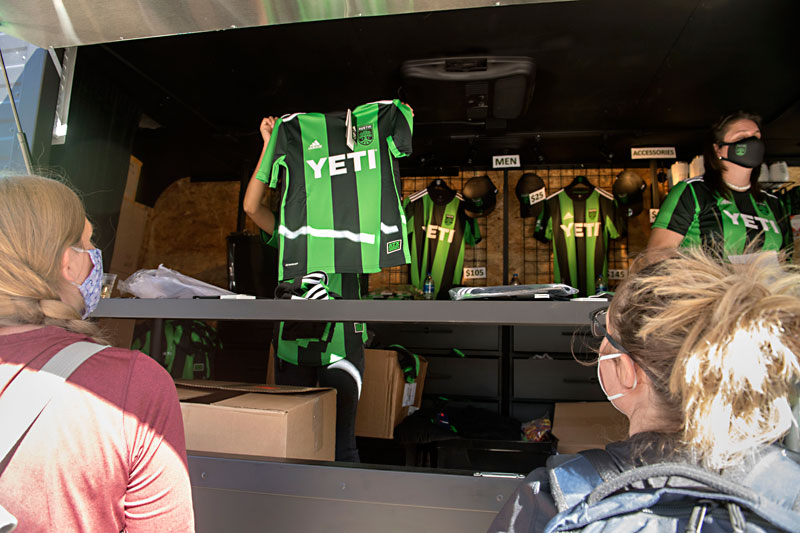 Austin FC introduced their jersey this week; see the reveal at www.austinfc.com/uniformforaustin. The Verde Van, a 1983 Chevy Barth RV that's now the club's mobile retail shop, is on a multiday tour to various locations around town, ending at Hotel Vegas, 1502 E. Sixth, from 6pm to midnight this Saturday, Nov. 21. Make a reservation online (if they're not sold out), and get your jersey personalized right there at the onboard heat press.

The MLS playoffs get underway this Friday, Nov. 20, with the Eastern Conference play-in round, followed by conference quarterfinals pretty much all day Sat.-Sun., Nov. 21-22, and a triple-header Tuesday evening, Nov. 24, on ESPN. See the full schedule with this column online... As for next year, MLS President Mark Abbott told Soccer America this week that the league is "targeting to start our season in early March as usual."

The U.S. men featured a strong showing from the youth corps in their first games in months, a 6-2 romp over Panama, following a frustrating 0-0 draw at Wales. The roster was very young and made up of entirely of players based in Europe – including 11 kids not old enough to buy beer in the U.S. – playing at clubs in England, Spain, Belgium, Ger­many, France, Portugal, and Holland. Debutants Nicholas Gioacchini and Sebastian Soto each scored two goals against Panama; Gio Reyna buried a lovely free kick; Yunus Musah, Uly Llanez, Timothy Weah, Richard Ledezma, and Sergiño Dest all impressed; these are names you're going to see in the U.S. lineup for a lot of years... Reyna's family became the first ever in which the mother, father, and son all played for U.S. national teams. Austin FC Sporting Director Claudio Rey­na was a fixture for the U.S. from 1994 to 2006; Danielle Egan Reyna played six times in 1993.

Elsewhere in the international break, Germany suffered their worst loss in nearly 100 years on Monday, 6-0 to Spain, who advanced to the final four of the European Nations League along with France, Belgium, and Italy... In South America, Austin FC's first two signings, Cecilio Domínguez and Rodney Redes, both saw action for Club Guaraní as they advanced to the final 16 in the Copa Libertadores. Next up: Brazil's Grêmio, Nov. 26 and Dec. 3.

The U.S. women play their first game in more than eight months next Friday, Nov. 27, facing Holland in a rematch of the 2019 World Cup final.

Eastern Conference, Round One

Western Conference, Round One