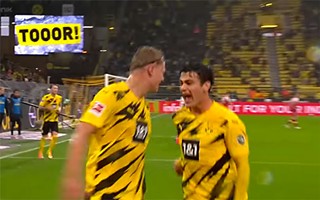 Gio Reyna (r) celebrating one of his record-breaking assists

Austin FC's Paraguayan duo, their first two players to be put under contract, accounted for all the goals Thursday night as their current club, Guaraní, clinched a spot in the Copa Libertadores knockout round. Rodney Redes had two assists, and Cecilio Domínguez scored the other in a 3-1 win over Argentine side Tigre.

Meanwhile, Gio Reyna, 17-year-old son of AFC Sporting Director Claudio Reyna, is tearing up the Bundesliga, figuring in five of Dortmund's seven goals over the first three games of the German season. On Saturday, he left the field to a standing ovation after dealing out three assists, becoming the first teenager to notch that rare hat trick in Bundesliga history. One was an inch-perfect corner kick (really, just the fact that one of the biggest clubs in the world is entrusting corner kicks to a 17-year-old!), and the other two were real beauties – winning the ball, beating defenders, finding space, and delivering perfectly weighted passes for striker Erling Haaland to finish.

Just two more chances to see your 2020 UT Longhorns in action at Mike A. Myers Stadium in this strange, short season. They take on Kansas State at 5pm Friday (also on ESPN+), trying to bounce back from a tough loss at West Virginia last week.

The Austin Bold went out on a high note, with a 2-1 win over San Antonio closing out their disappointing 2020 campaign. No playoffs, but kudos to the team and COTA for fighting through the circumstances and putting on a good show to the end.