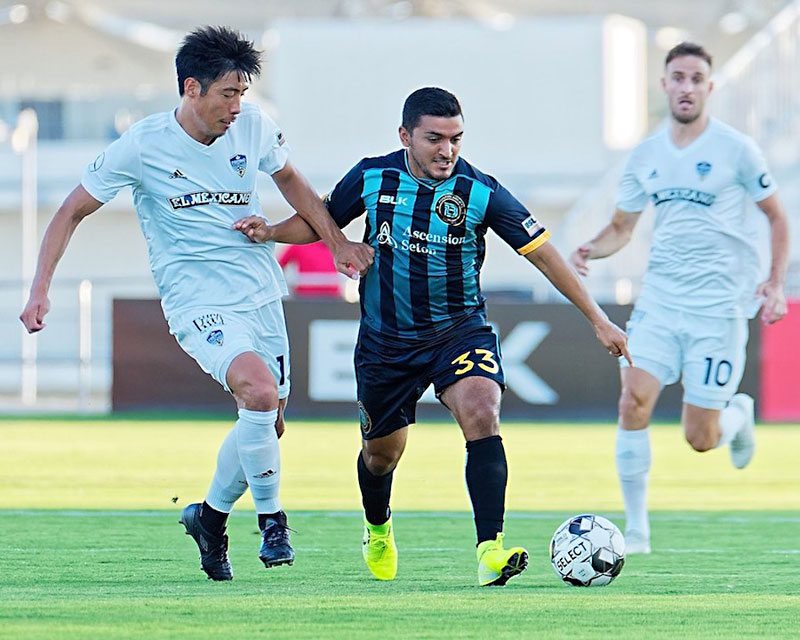 It's Fan Appreciation Night at Bold Stadium this Sunday, and there will be, believe it or not, a lot of loyal fans there, and probably a goodly contingent from the Alamo City as well, as local rivals San Antonio FC look to cap off their own remarkable season – currently the best record in the 35-team league – by knocking the Austin Bold out of the playoffs. The Bold go into the finale almost certainly needing a win to finish ahead of FC Tulsa; they're virtually tied in the standings as we go to press Wednesday evening, and Tulsa still has a makeup game to be rescheduled. And, who knows, this could be the last appearance at Bold Stadium for a lot of Bold veterans – the guys who created and have been the faces of this franchise: Javi Baez, Kléber, Amobi Okugo, Andre Lima, Diego Restrepo, Jermaine Taylor, Sean McFarlane, and of course hometown hero Sonny Guadarrama. The game is at 5pm, but gates open at 3pm for $3 beers until kickoff, free rides for kids under 8 at the new COTALAND Amusement Park, and 40% off Bold merch; tickets at AustinBoldFC.com. There's a pretty rigorous safety protocol – masks, temperature checks, 25% capacity, etc. But if that's not enough, it's also being shown live on ESPN+.

The UT Longhorns have only scored once all season, but they made it count, as freshman forward Presley Echols got the only goal in a 1-0 win over Oklahoma in the Red River shootout. It was the Dallas native's first college game, and it earned her an honorable mention on the TopDrawerSoccer National Team of the Week. Haley Berg, who set up the goal, was named to the national first team, a first for the senior leader. UT travels to West Virginia this Friday, taking on the seventh-ranked Mountaineers at 6pm; watch live on Big 12 Now on ESPN+.