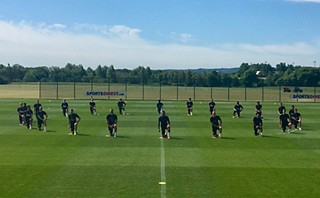 "United as One": DeAndre Yedlin's Newcastle United (Image via twitter/thisisanfield)

The Whole World Is Watching

Even as soccer leagues in Europe and the U.S. make their plans to restart, attention shifted this week to the murder of George Floyd, with a number of players and teams of various nationalities displaying solidarity with statements and on-field gestures. At least two players were yellow-carded for displaying homemade "Justice for George Floyd" undershirts, prompting both FIFA and the German federation to call for an exception in this case to the rule prohibiting "any political, religious or personal slogans, statements or images" on equipment.

"The victims of racism need all of us to show solidarity," said German federation President Fritz Keller in a statement. "I can completely understand the actions from the weekend. Nobody can be indifferent to what happened in the United States."

You know things are really bad when FIFA is holding the moral high ground on you.