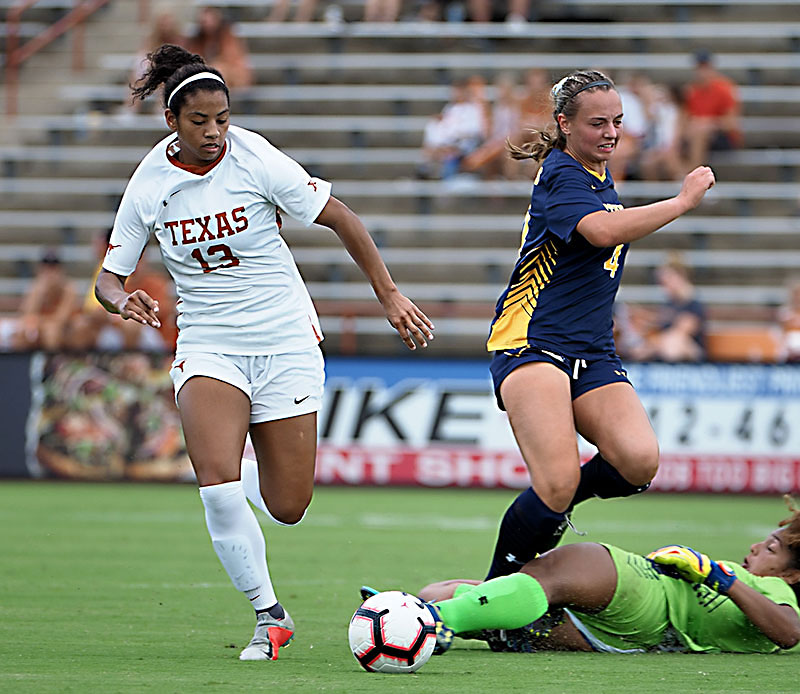 Friday is one of your last chances to see UT's senior striker Cyera Hintzen. (Photo by Paul K. Bordovsky)

The Texas Longhorns split a pair last weekend, losing a 2-1 overtime thriller to West Virginia, after their third straight 1-0 win, over TCU, to start Big 12 play. This Friday, Oct. 11, they host #18 Oklahoma State at 7pm at Mike Myers Stadium, with only one more weekend of home games left in the season after this, believe it or not.

The Austin Bold's season is on the line tonight in El Paso, where a win puts them in the hunt for a home playoff game in the USL West, but a loss puts them back in danger of missing the postseason altogether. Two more road games after this, before the regular season ends next weekend.

The U.S. men open CONCACAF Nations League play this week, playing Cuba in D.C. at 6pm, Fri., Oct. 11, on FS1, and then Canada in Toronto, at 6:30pm, Tue., Oct. 15, on ESPN2. Canada's treating it like "our World Cup," but the expectation, of course, is that the U.S. will steamroll their way through the qualifying group of this new international competition. We shall see. The return legs are Nov. 15-19. There's Euro qualifying during this same international break, with a scattering of games on ESPN2, Oct. 10-15.