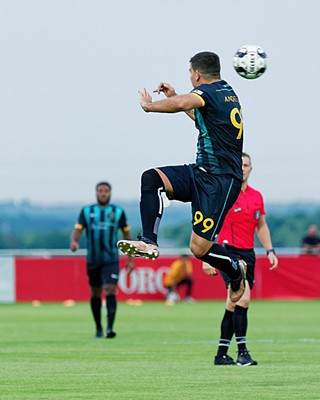 The Austin Bold put in a pretty complete performance Sunday night, blanking Rio Grande Valley 3-0 to clinch the first annual Copa Tejas trophy and hang on to fourth place in the USL West. Only three more home games left in this inaugural regular season, and they come in a 12-day period, starting 7:30pm Wed., Sept. 11, against perennial USL power Sacramento Republic. Then comes Reno at 6pm Sun., Sept. 15, and Las Vegas at 6pm Sun., Sept. 22. They'll really need to pile up points here, because they end with four games on the road, where they've struggled all year. See www.austinboldfc.com for tickets.

The Texas Longhorns bombed out of the national rankings with a pair of road losses over the weekend – 3-0 to Denver and 2-1 to Colorado as Haley Berg clanked a penalty off the crossbar with one second to go. Bizarrely, that's how the Horns won their home opener last week, with the roles reversed, saving a would-be game-tying PK with five seconds to go. They'll try to get back on track as they start a five-game homestand this Sun., Sept. 8, at 5pm against Texas A&M-Corpus Christi.