And Then There Were Eight

It's down to the quarterfinals, starting today, in the 2019 Women's World Cup. And tomorrow (Friday, June 28) comes the game everyone's been pointing to since the draw was announced: top-ranked, defending champion USA against host France, the tournament co-favorite and the only team in the past 40 games – over almost two years – to beat the Americans (a 3-1 friendly in Le Havre in January). The winner will be a huge favorite to win it all on July 7 in Lyon, though England and Germany may have a lot to say about that.

Players to watch: U.S. goalkeeper Alyssa Naeher, who was suspected to be a weak link coming in and whose awful decision to play a short pass to a covered defender promptly led to the Spanish goal in their last game – the only one the team has given up all tournament. Also Alex Morgan, who knocked in five goals against outmanned Thailand in the opener but has been largely invisible since and may still be nursing a nagging thigh injury. If she's not making incisive diagonal runs to open up space, the U.S. attack stays in neutral gear – as it was for much of the Spain game, managing only one shot on goal other than Megan Rapinoe's two penalty kicks. And, of course, there's Rapinoe herself, who struggled against an outstanding Spanish right-back but made plays when it counted, and who has very much become the face of this team, willingly taking on much of the media heat. She was at it again this week, welcoming the pressure of playing France ("I hope it's just a total shitshow circus") and telling Eight by Eight magazine that "I'm not going to the fucking White House." On the French side, watch out for Kadidiatou Diani, who has the pace and smarts to tear holes in the U.S. back line (which Paris tabloid Le Parisien has already compared to moldy Gruyère cheese). And Marion Torrent, the right-back who will have to deal with Rapinoe. 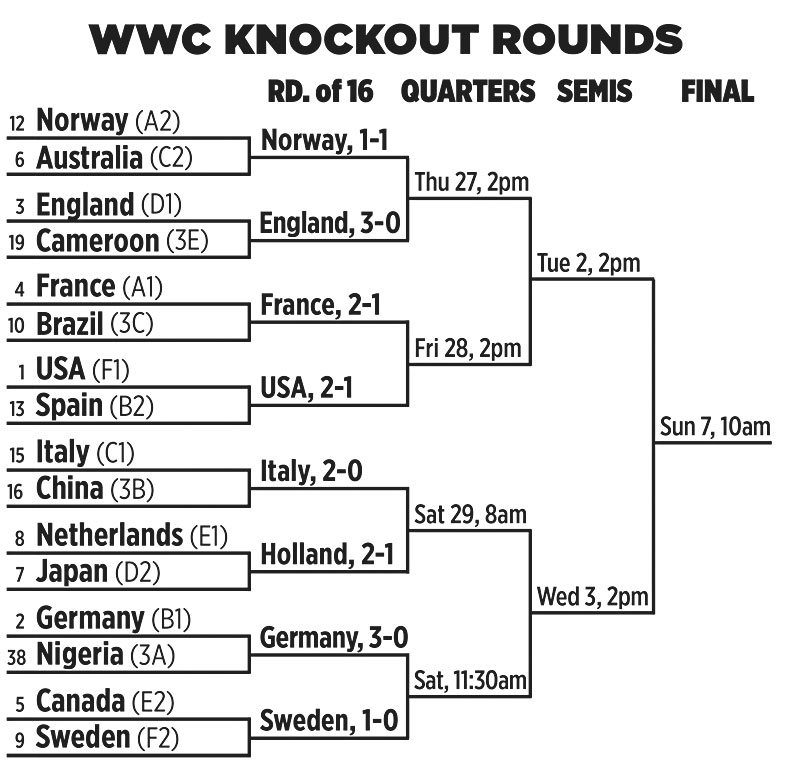 Elsewhere, the Round of 16 was all about European dominance: seven wins in eight games against non-European foes, including upsets of highly regarded Canada, Australia, and Japan. Even if the U.S. winds up lifting the trophy (as I think they will, moldy cheese and all), this tournament ought to be remembered as the one that confirmed the value of the large investments that various Western European countries have made in their women's leagues. England, Germany, France, and Sweden have long had strong leagues; in just the last few years, they've been joined by the Netherlands, Spain, and Italy, who've seen attendance and media interest jump dramatically. And – what do you know? – here all those countries are, proving out the value of that investment on the world stage. And, maybe, planting the seeds for that sort of investment in other parts of the world.

France is experiencing a fairly extreme heat wave; the temperature is expected to be 90 degrees at the 9pm kickoff for the U.S. game. It's unclear whom that might favor; the U.S. players are probably more accustomed to playing in that level of heat (or higher), but they also come in with considerably less rest time than the hosts, who've had four more rest days between their last three games than the Americans... TV ratings continue to set global records, and are even up by 16% in the U.S. compared to the 2015 tournament in Canada, when key games were aired in primetime instead of daytime weekdays. Through the first two weeks, Austin had the third-highest ratings among U.S. markets, after Kansas City and San Diego.

All times CDT; all games televised on Fox, FS1 or FS2, and Telemundo.

WWC Watch Parties: Your favorite soccer pub will doubtless be showing all the games, but here are a few special events:

• Haymaker will host American Outlaws and the Austin Soccer Foundation for all the U.S. matches, with merch raffles benefiting ASF. 2310 Manor Rd. www.haymakeraustin.com. 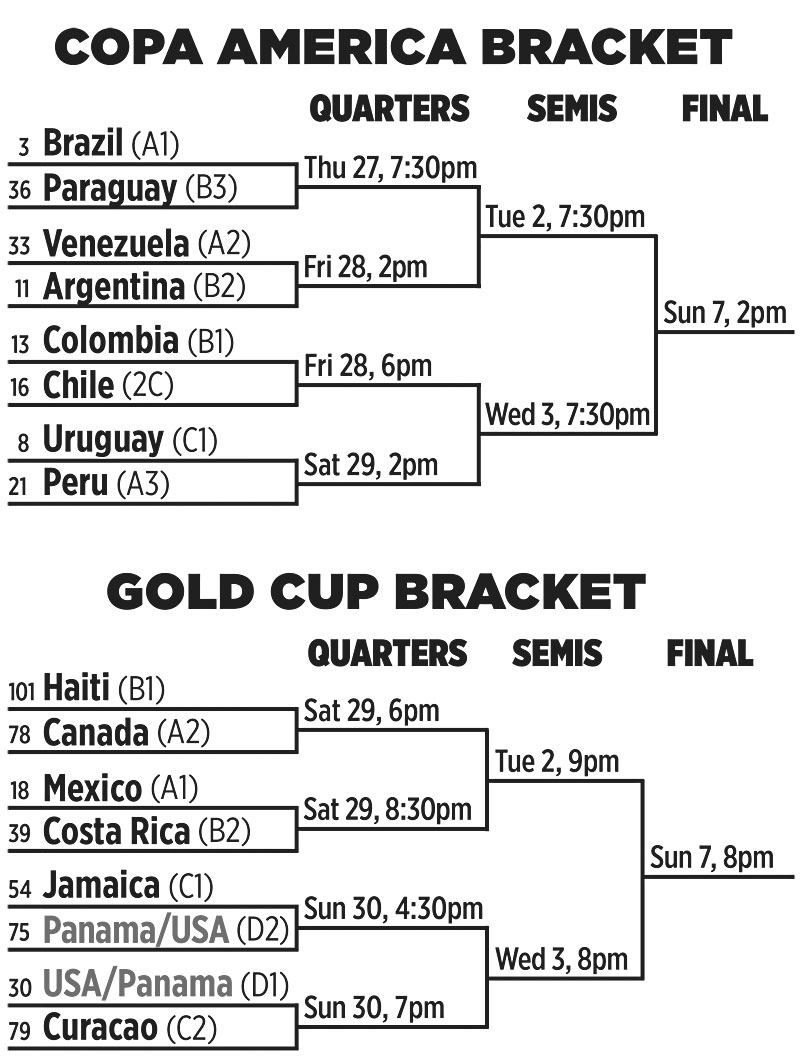 Both the Gold Cup in the U.S. and Copa América in Brazil are down to the last eight as well, setting up a ridiculous bounty of riches for the armchair soccer fan over the next 11 days. The U.S. men seem to have snapped out of their recent funk, running up a 6-0 win over Trinidad & Tobago to gain some small revenge against them for knocking us out of World Cup qualifiers in the last cycle. They're playing Panama, as we go to press, to decide the group winner; either way, they go on to a quarterfinal on Sunday in Philadelphia. (The other quarterfinal doubleheader is in Houston, where tickets are still available for what should be a great matchup between Mexico and Costa Rica.) Elsewhere, the huge surprise is the Caribbean nations' success: Jamaica was expected, but Haiti and Curaçao were never expected to get this far. Once again, infrastructure investment (which trickled into the Caribbean almost as a side effect of the massive FIFA bribery scandals of the last decade) pays off... No such surprises down in South America, where the heavyweights all came through unscathed. Semifinals for all three tournaments are next Tuesday-Wednesday, July 2-3, with the finals Sunday, July 7. All Gold Cup games are on FS1, FS2, and Telemundo; Copa América is on ESPN+ and Telemundo.

All times CDT; all games televised on FS1, FS2, and Telemundo.

All times CDT; all games televised on ESPN+ and Telemundo.