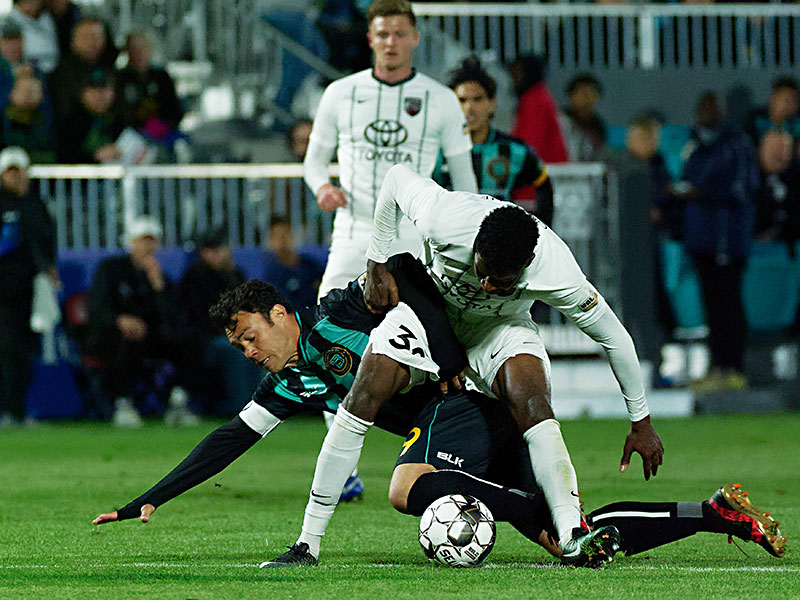 It was an impressive return for pro soccer in Austin Saturday evening, as the Austin Bold got the first win in club history, in the first home game in club history, in the first game ever played in Austin's first soccer-specific stadium, Bold Stadium at Circuit of the Amer­icas. And it came, 1-0, over Copa Tejas rival San Antonio FC. That's a lot of firsts, but it was hard not to look back as well – to the pre-history, as it were – and draw comparisons to earlier teams (including the Austin Aztex, of whom the Bold are a direct descendant) playing in the USL. And I must say, fond as I was of cozy little House Park, the game-day experience at COTA is a huge step up – a real pro sports feel, as opposed to the high-school-enhanced atmosphere of Austin's previous minor league soccer efforts. And they were rewarded with a sellout crowd of over 5,000 fans.

On the field ... well, it's still a work in progress, with a lot of talent and not much cohesion as of yet. The cold, blustery night didn't help, with 40mph winds knocking down anything tried in the air. Brazilian veteran Kléber Giacomazzi got the game's only goal on what looked like a goalmouth scramble, but on replay was a very cool, collected, one-touch finish to the far corner – the guy's a pure goal-scorer. It's a long season, so the squad will have time to round into form and could be very good, indeed. Next up: Phoenix on April 17; see AustinBoldFC.com, plus a photo gallery with this story online... Bold coach Marcelo Serrano also coaches the U.S. Virgin Islands national team and led the Dashing Eagle to their first goals in almost three years in last week's 3-0 win over Anguilla in CONCACAF Nations League qualifiers. Go Dashing Eagle!

Derby Day! The Texas Longhorns and St. Edward's Hill­toppers meet in an exhibition match this Friday night, April 5, 7pm, at Myers Stadium. It's the first of three home games for the Horns as they wrap up their spring schedule with Monter­rey (Fri., April 12, 7pm) and Houston (Sun, April 14, 1pm).

European Champions League quarterfinals start next week, April 9-10: Spurs-Manchester City and Liverpool-Porto on Tuesday; Manchester United-Barcelona and Juventus-Ajax on Wednesday, with the return legs April 16-17. All at 2pm on TNT... CONCACAF Champions League semifinals are going on as we go to press; return legs April 10-11... And in general, it's that crazy season in European and world soccer when leagues are going into their stretch runs and cup competitions into their final rounds, and the top teams are competing in several at once. Manchester City, for just one example, has just begun a stretch where they'll play nine games in 29 days – in the Premier League, FA Cup, and Champions League – with more to come if they keep winning.

The McCallum boys are the only AISD team left alive after Tuesday night's area UIL state playoffs. [Correction: the Eastside boys also advanced in 4A.] But 15 other Centex teams are into the third round, led by both the Lake Travis boys and girls, and three teams from Pflugerville ISD. Three more rounds to go before the state championships, April 17-20 at Birkelbach Field in Georgetown.