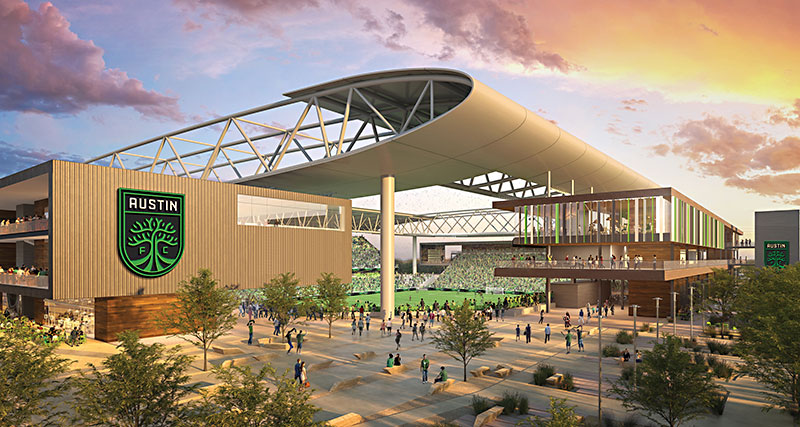 The top two items on the list are the same as last year, but considerably further along.

1) Is Austin finally a Major League city? It's ever so close now. With a McKalla Place stadium contract in hand, we're waiting only for PSV's divorce from Columbus, Ohio, to be finalized before Major League Soccer officially announces Austin FC as the 27th MLS franchise, starting play in 2021. Keep champagne on ice.

2) Pro Soccer is back this year! Austin Bold FC will begin play March 2019 in the USL Championship season, playing at Bold Stadium at the Circuit of the Americas, the first purpose-built soccer stadium in Central Texas. Saturday, March 30, is the home opener against new archrival San Antonio FC.

3) Longhorns knocking on the door. Finishing in the top 20 in the nation for the second straight year is good, but the UT women were hoping for more after climbing as high as eighth before fading down the stretch and getting shut out in their last four games. Junior Cyera Hintzen earned Big 12 Offensive Player of the Year.

4) France runs away with World Cup 2018. The tournament featured plenty of goals, entertaining play, some surprises, a successful rollout of video review, and a lot of exciting newcomers – none more galvanizing than teen speedster Kylian Mbappé, who led a squad comprised of 17 sons of first-generation immigrants to the title. Vive la France.

5) U.S. gets World Cup 2026. The FIFA membership voted in June to accept a joint bid by the USA, Canada, and Mexico to host the 2026 World Cup. A late bid from Morocco got some support amid an anti-U.S. backlash, but in the end, the "United" 2026 bid won easily.

6) U.S. Women prep for World Cup 2019. The women's national team went undefeated in 20 games this year. They hold the #1 ranking in the world and look like the favorites for the WC2019, running June 7 through July 7 in France.

7) U.S. Men rebuilding. After missing out on WC2018, the men's national team spent the entire year trying out a lot of youngsters under an interim coach before naming the Columbus Crew's Gregg Berhalter as the new head man. Expect the youth movement to continue, as Berhalter tries to define the elusive "U.S. style" of play.

8) U.S. Soccer rebuilding? The U.S. Soccer Federation elected the establishment candidate as its new president in February, elevating Vice President Carlos Cordeiro to the top position over a gang of outsider candidates – including Hope Solo.

9) Atlanta United wins the MLS Cup in just their second year in the league and set a league attendance record for the second year in a row. Let's hope the 2021 expansion team does that well.

10) Local Soccer nonprofits thrive. Want to support the game? A growing number of service groups address various social needs. Among them: Upper Ninety brings programs to local low-income neighborhoods; Soccer Assist pays for lower-income kids to play in elite leagues; It Starts With Soccer funds projects in Africa; and the Austin Soccer Foundation is sort of an umbrella group supporting all of them and more.