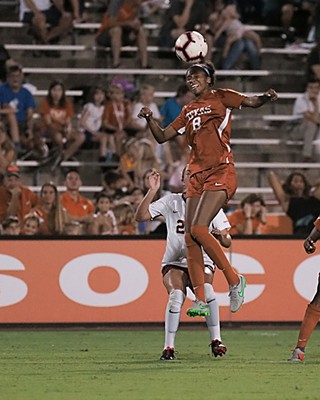 The Texas Longhorns play their final home games of the season this weekend, hosting Kansas this Fri., Oct. 19, at 7pm and Kansas State Sun., Oct. 21, 1pm. The Horns won a thriller against Oklahoma on Friday, on Alexa Adams' game-winner with just a minute to go – her second goal of the night, both assisted by Cyera Hintzen. They're now 11-2-2 and ranked in the top 20 in the nation.

As you've no doubt heard, it looks like Austin FC will start play in 2021 as an MLS expansion team, with the Crew staying in Columbus under new ownership; see "MLS in Austin: Someday, Someway," for more reaction and details... Austin's more immediate pro team, Austin Bold FC, just announced that they'll hold their first open tryouts for the 2019 season Fri.-Sat., Nov. 9-10 at Circuit of the Americas. Online registration ($155) is open at AustinBoldFC.com/player-tryouts.

The U.S. Women are playing Canada for the CONCACAF Women's Championship as we go to press; by advancing to that final (by a 24-0 scoreline over four games), the U.S. has already qualified for next summer's Women's World Cup... The U.S. Men, meanwhile, showed off some very young, very raw talent in losing 4-2 to Colombia and tying Peru 1-1 over the weekend, in likely their last games under interim coach Dave Sarachan... European Champions League games next week: Tue.-Wed., Oct. 23-24, noon & 2pm.