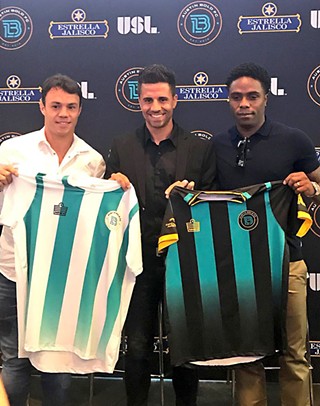 See "Pick Your Plan for McKalla Place," Aug. 10, for the latest on the Columbus Crew/McKalla Place saga, heading to City Council today. But meanwhile, Austin did gain one pro soccer team for sure last week: Circuit of the Americas unveiled the Austin Bold FC, who'll be playing at COTA in the USL. The intent had been known for a while; Friday's event introduced the name, the jersey and logo, and an impressive first round of talent: Brazilian striker Kléber (Freitas, among at least five Brazilian footballers of that name) who's had success both in Europe and South America, longtime MLS midfielder Marcelo Saragosa, and Dutch defender Edson Braaf­heid, who played in the 2010 World Cup final. Most important, though, will be head coach Marcelo Serrano, who worked for five years as technical director and coach in the Brazil­ian Premier League, before moving to the U.S. and becoming a coach of the U-17 national team, and head coach of the U.S. Virgin Islands national team. He'll lead them in CONCACAF qualifying in September, but will move to Austin within the next week, according to Bold General Manager Roberto Silva. And then things move fast: Preseason will start mid-January, with the first preseason games mid-Feb. The USL season starts March 8.

And of the stadium, Silva says most of the infrastructure and the field itself are already in place: "what's missing is the bleachers and the locker rooms." Construction will begin after F1 in October, and Winter Wonderland in December.

And no, Usain Bolt won't be coming here; he announced earlier this week that he'll be training in Australia instead, as had been expected.

English Premier League starts up this weekend with six games being shown in the U.S. – primarily on NBC Sports network and either Universo or Telemundo – starting Friday afternoon at Old Trafford:

Turner Sports now has U.S. broadcast rights for the European Champions League, and will air 46 games, with 340 more available streaming behind a paywall. Their coverage kicks off Aug. 15 with the UEFA Super Cup – Real Madrid vs. Atletico Madrid – with Champions League playoff rounds to come Aug. 21-22 and 28-29.