Most of my soccer attention this week has been on the rapidly evolving Columbus Crew soccer stadium situation. See "A Tale of Two Stadiums," Dec. 8, for an update.

Meanwhile, Toronto FC will host Seattle Sounders in the MLS Cup final this Saturday, Dec. 9, at 3pm CT on ESPN, in a rematch of last year's Major League Soccer title game. Toronto's been the best team all year long, running up the best regular-season record in MLS history behind strike duo Jozy Altidore and Sebastian Giovinco, but Seattle's the team looking to repeat, behind Clint Dempsey and a solid defense.

The European Champions League group stage ended this week, with all five English teams advancing to the final 16, along with three from Spain... Europa League group play winds up today, Thu., Dec. 7, with several games at both noon and 2pm on Fox Sports... The World Cup draw was held last Friday, producing no real "Group of Death," but one of the weakest groups in memory: host Russia, Uruguay, Egypt, and Saudi Arabia. See the full groupings below: 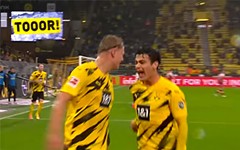