Pro soccer is returning to Austin 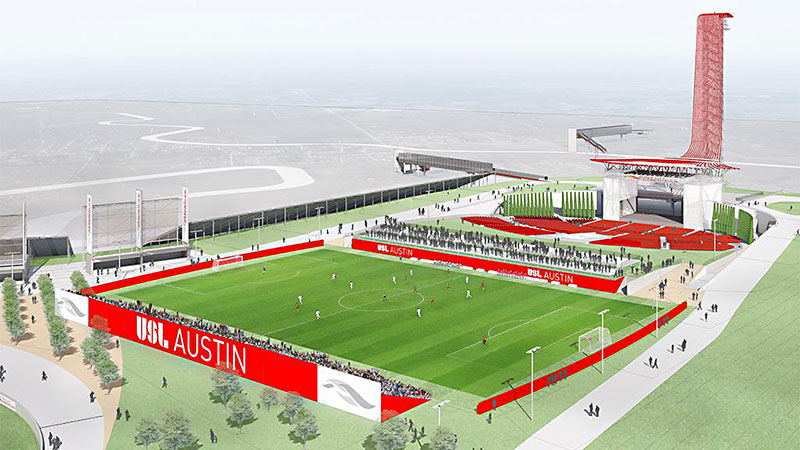 Big news on Wednesday out of United Soccer League headquarters in Tampa, Fla., and COTA headquarters in Southeast Austin: Austin will again have a pro soccer team, starting in 2019 – playing at a brand-new, 5,000-seat soccer-specific stadium built by and at the Circuit of the Americas, next to the Formula 1 track and Austin360 Amphitheater. The team will play in the same league as the late lamented Austin Aztex, and is spearheaded by COTA Chair­man Bobby Epstein, a minority owner in the Aztex who recently assumed majority ownership, but it won't keep the name. None has yet been decided, but FC Austin is the front-runner and placeholder: That's the name pasted on the artist's rendering that accompanies the announcement on www.uslsoccer.com.

There's already been grumbling among aficionados, primarily about the location, but the plan has a lot more promise of success coming out of the gate than any previous incarnation has. First and foremost is the stadium. Much as I love House Park, that was never going to be a viable long-term option for a pro franchise. (No beer!) And no one else has been able to untangle the Gordian knot of finance, land availability, and scalability that would be required to pull off a near-Downtown stadium plan. COTA has the land, and will build the stadium at no public cost, as an expansion of the new 1,000-seat FC Barce­lo­na Escola training facility that's due to open in a couple of weeks.

Second is Epstein himself, who has a long history in local soccer as a player and supporter, and an equally long history of business success. This is clearly something he and COTA want to do, and they are not going to do it half-assed. Epstein has also long had his sights on a higher level: He was a booster of previous efforts toward bringing Major League Soccer to Austin, and that still has to be somewhere on the wish list. Austin has fallen pretty far down the list of MLS hopefuls, but League Commissioner Don Garber was still touting us as a promising market at his SXSW appearance in March. But anyway, that's the ride we're on now.

FCBEscola, meanwhile, is about to kick off its inaugural, 2017-18 training season, beginning Aug. 18 (schools.fcbarcelona.us/austin).

The UT Longhorns open their season this Friday, Aug. 11, 7pm, with a home exhibition match against Incarnate Word (at Mike Myers Stadium, corner of Manor & Red River). The regular season starts the next weekend, as the Horns host Rice on Friday, Aug. 18, 7pm, and Western Kentucky Sunday, Aug. 20, 2pm. A Back to School special offers $1 tickets for students, $3 general admission.

Meanwhile, the European season is underway, as the English Premier League swings into action this weekend, starting with an intriguing matchup of a couple of last season's most prominent underachievers – Arsenal and Leicester City – at 1:45pm Friday, Aug. 11, on NBCSN. Follow that up with nine more EPL games the next two days (including the EPL debuts of two small-market newcomers: Brighton & Hove Albion and Hudders­field Town), plus a raft of other games from Italy, France, Portugal, and Germany, climaxing with the first Clásico of the season: new-look Barcelona facing Real Madrid in the Supercopa de España Sunday, Aug. 13, 3pm, on ESPN.