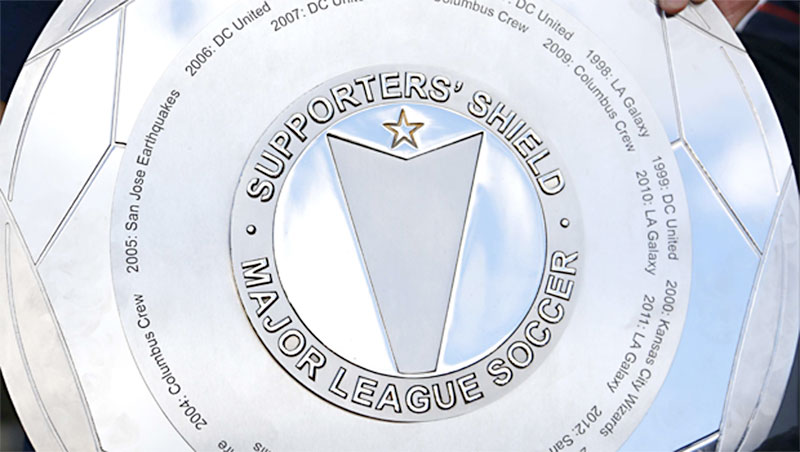 The MLS Supporters' Shield will be at Haymaker Tuesday night

The U.S. men had their worst week in memory, losing to Mexico at home, 2-1, and at Costa Rica, 4-0, to open the final round of World Cup qualifying. There's a long way to go yet, of course, with no more games until March, which gives U.S. Soccer a long time to brood and ponder whether their commitment to head coach Jurgen Klins­mann is still as strong as it has been.

The St. Edward's men got their first NCAA tournament victory in program history on Saturday, beating Regis University 1-0, on a dramatic 86th-minute goal from Steve Aoudou, a senior defender out of Anderson High. That earned them a trip to San Diego this weekend, where a Sweet 16 matchup with conference rival Midwestern State will be the rubber match between the two. St. Ed's lost to the Mustangs at home in the regular season, then beat them in Wichita Falls in the conference tournament final... The St. Ed's women's season ended Friday in the NCAA first round with a shootout loss to Midwestern State, after a 1-1 draw. They end the season at 15-1-3... The Big 12 women earned six Div. I NCAA bids this year; Kansas, Oklahoma, and top-ranked West Virginia have advanced to next weekend's second round.

Tuesday night football: MLS got great TV ratings earlier this month when its conference semifinals ran as two consecutive Sundays of quadruple-headers on FS1 and ESPN. For the conference finals, instead, they've got a Tuesday night doubleheader on Nov. 22 – Toronto at Montreal at 7pm, and Colorado at Seattle at 9pm – with the return legs the following Sunday afternoon and Wednesday early evening. Interesting marketing choice... Watch those Tuesday night games at Haymaker, 2310 Manor Rd., where you can also celebrate the release of The United States of Soccer: MLS and the Rise of American Soccer Fandom, by Michener Center grad, erstwhile Chronicle contributor, and longtime local soccer observer Phil West – who adds that some FC Dallas fans will be bringing the MLS Supporters' Shield down for the party, starting at 6pm.