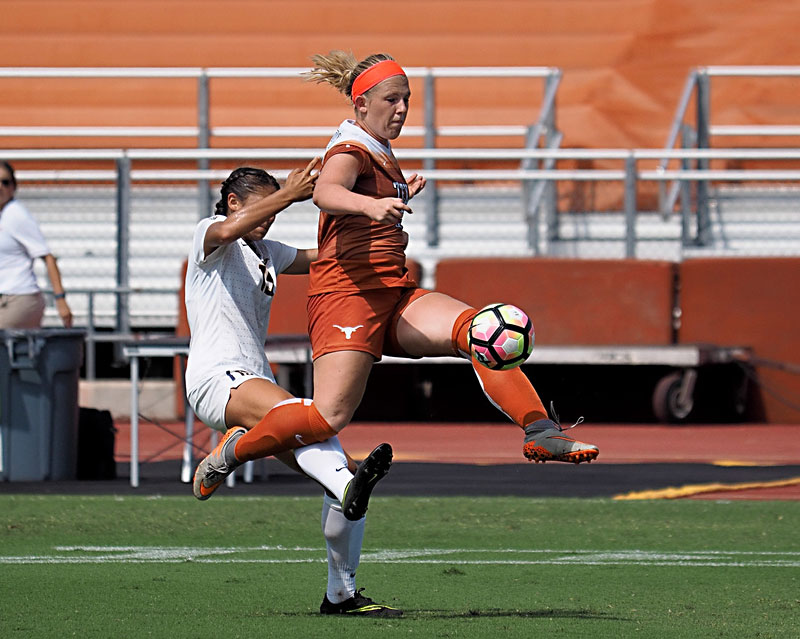 Hard to say what was the better result for the UT Longhorns this past weekend: Friday's 7-0 pasting of hapless Sam Houston State was a confidence-builder that coach Angela Kelly compared to "every day in training," but a fairly evenly played 1-0 loss to 12th-ranked California showed that the Horns can go toe-to-toe with some of the best in the nation. The Horns, now 3-2, go on their first road trip of the season this weekend, at 19th-ranked Ohio State and Miami of Ohio.

The St. Edward's men are up to No. 7 in the nation after a couple of impressive 2-0 wins in Colorado, including over previously sixth-ranked Colorado School of Mines. They play their home openers this Friday, 3pm against Fort Lewis, and Sunday, 1pm against nationally ranked Colorado Mesa. The Hilltopper women, strangely, dropped from 14th clear out of the NSCAA poll, despite pasting New Mexico Highlands, 5-0, in their opening game.

As qualifying for the 2018 World Cup in Russia unfolded across four continents this week, our own CONCACAF federation was the only one with decisive results, as 12 teams were pared to six with the final games of the semifinal round Friday and Tuesday. The U.S. qualified for the final hexagonal round with a pair of easy wins over St. Vincent & the Grenadines (6-0) and Trinidad and Tobago (4-0) to set up a juicy hex opening game at home against Mexico, Fri., Nov. 11, in Columbus, Ohio. Elsewhere that same day, it'll be Honduras-Panama and Trinidad-Costa Rica.