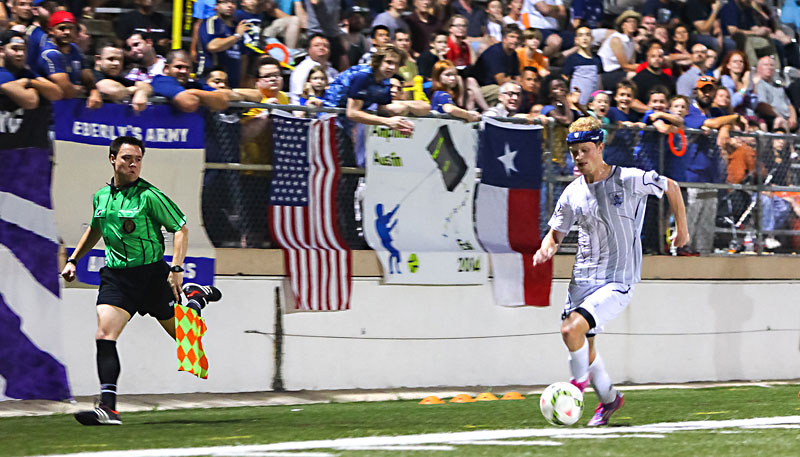 The Austin Aztex ended their inaugural season last Sunday with a stirring three-goal comeback in Vancouver to beat the Whitecaps FC 2, 3-2, on goals by Romain Gall, Tony Rocha, and an 85th minute winner from Kris Tyrpak. Now, after a tough season on and off the field, the Aztex organization pivots to trying to build for the future, with much of that effort going into securing a permanent stadium home. To that end, see the new website at www.stadiumforaustin.com: "a movement to support a Major League stadium in our hometown" ... Aztex fans have voted Kris Tyrpak as this season's fan favorite, edging out captain Lance Rozeboom and fellow Austinite Devin Perales; he'll now go up against the fan favorites from the 23 other USL teams in national polling, with a winner to be announced Oct. 15. See info on how to vote at www.austinaztex.com.

The UT Longhorns were held to a scoreless draw by Arkansas-Little Rock Sunday afternoon, despite dominating throughout, and rolling up a 29-6 edge in shots. Nonetheless, the Horns stretched their unbeaten streak to four games; they open Big 12 play this Friday at West Virginia, who are ranked fifth in the nation and led by Canadian national team stars Kadeisha Buchanan and Ashley Lawrence... Those two are among the 13 players removed this week from EA Sports' FIFA 2016 video game for fear of compromising their eligibility with the NCAA.

The St. Edward's men rose to No. 9 in the nation after blanking Huston-Tillotson and Ouachita Baptist, 8-0 and 6-0, respectively. The women are at No. 14 after losing, 2-1, to fifth-ranked nemesis Western Washington, who knocked them out of the NCAAs last year. The women are on the road this weekend and next; the men host Midwestern State at 4pm, Friday, Sept. 25, and Eastern New Mexico at 1pm, Sunday, Sept. 27.

European Champions League Game Day 2 is next Tue.-Wed., Sept. 29-30. Kickoffs are at 1:45pm; choose from four games being shown live each day on ESPN and Fox Sports.