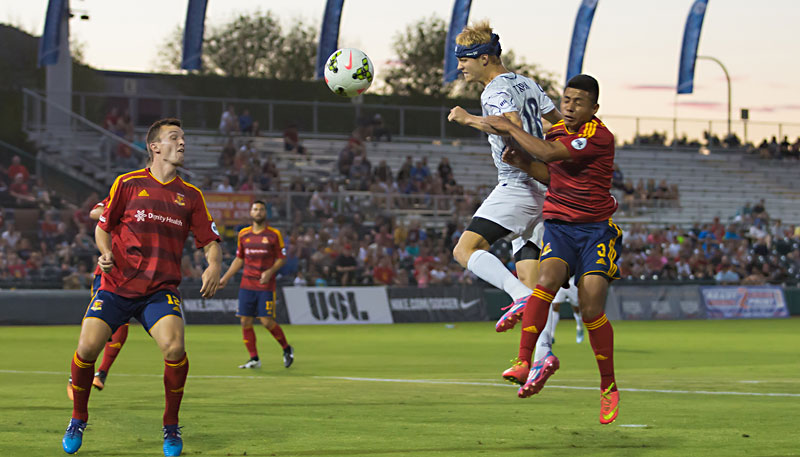 Saturday is a huge night for the Austin Aztex, as they continue their playoff push, ­hosting Portland Timbers 2, with Landon Donovan, Brian Ching, and Stuart Holden playing in a promotional game for them. Bidding continues through 9am Friday, July 31, for a chance to play a 3v3 game against the trio at halftime, sit with them in the second half, or get an autographed jersey. Proceeds benefit the Aztex Soccer Foundation.

The Aztex got their second straight win over Arizona United last week, riding an early Kris Tyrpak goal and stifling defense to a 1-0 decision. They're now just three points out of sixth place and a USL playoff spot, but Saturday still has the feel of a must-win game: There are just nine games left, and the next seven after this one are against teams in playoff positions. The game is at 7:30pm at Kelly Reeves Stadium, 10211 W. Parmer, and the Aztex and Capital Metro are offering free train rides on game day; visit www.austinaztex.com/capmetro to print the pass, and check the MetroRail schedule at www.capmetro.org.

The three former U.S. national team stars are in town for their Helm Soccer School, a three-day camp taking place this weekend at Onion Creek Soccer Complex. And tonight they're participating in a panel discussion and reception for the nonprofit organization Soccer Assist: Thursday, July 30, 7-9pm at the Waller Ballroom, 700 E. Sixth. Tickets are $100 for adults and $50 for kids; more info at www.soccerassist.org.

The U.S. men bowed out of the CONCACAF Gold Cup in lame fashion, losing to Jamaica in the semifinals, then being thoroughly outplayed by Panama in Saturday's third-place game. They didn't have a good game at any point in the tournament, and they've got other important games ahead of them: They face Gold Cup champs Mexico in a one-game playoff in October for a place in the 2017 Confederations Cup, then start World Cup qualifying in November... The draw for WC qualifying was held this week in finals host Russia, and the U.S. drew a relatively easy group; they'll open against either Aruba or Saint Vincent and the Grenadines, and also face Trinidad, and the Guatemala/Antigua & Barbuda survivor, with the top two advancing to the Hexagonal final round of qualifying... Things will be dicier in Europe, where the draw dropped former World Cup champions Spain and Italy into one of the nine groups, and Netherlands, France, and Sweden into another... Andrea Pirlo made his MLS debut for New York City FC this week, and former Chelsea striker Didier Drogba signed with Montreal Impact.

The Aztex also this week announced the inaugural Footgolf City Championship, to be played Aug. 15 at the Harvey Penick Golf Campus, 5501 Ed Bluestein Blvd. If you haven't yet played footgolf, it's a blast – played by kicking a soccer ball into oversized holes, around Penick's nine-hole golf course. See www.bit.ly/footgolfcitychamp for more info.