The Austin Aztex begin the second half of their 2015 home schedule this Saturday evening at Kelly Reeves Athletics Complex (10211 W. Parmer, just north of Lakeline Blvd.), hosting the Tulsa Roughnecks at 7:30pm. It's their first home game since May 24 – the morning before House Park got flooded out – and they've been working ever since then on trying to re-create the fan experience in the new venue. No biergarten, I'm afraid, but there'll be live music this week by Wesley Luns­ford, with food from Wholly Kabob, Load a Bowl, and Burro Cheese Kitchen. And the Aztex will donate $1 to flood relief for every fan who attends. See www.austinaztex.com for more info and a variety of ticket packages... The Aztex lost 3-1 at Portland on Sunday, in their fourth straight road game. Goalkeeper Devin Perales was red-carded late in the first half, so he'll be unavailable for Tulsa, and Cody Laurendi will get the start.

Meanwhile, the Aztex are also competing in the U.S. Open Cup competition; they're taking on Major League Soccer's Houston Dynamo in the fourth round as we go to press Wednesday, trying to keep up their unbeaten record against other Texas teams and strike a blow for the lower-division USL. In Tuesday's U.S. Open Cup action, MLS clubs swept all eight games against NASL and USL opposition. 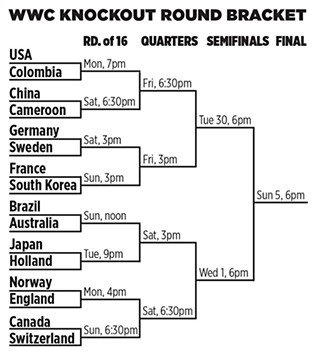 The group stage is finishing as we go to press, but with just one pair of Group E games left to play, there are still a lot of possible scenarios for the Round of 16 matches that kick off this Saturday. Below is the schedule, updated since press time:

• All six top seeds won their groups Overall, Germany looked the most convincing, though defending champ Japan will be a tough nut to crack. Host Canada hasn't impressed yet, and France's looked great, aside from their 0-2 collapse against Colombia, the only big upset of the round.

• The U.S. women topped the "Group of Death" comfortably, capped by a 1-0 win over Nigeria on Abby Wambach's lovely left-footed volley of a Megan Rapinoe corner kick. But while the Americans have looked poised and comfortable defensively, they've been unable to create much flow in attack. It was a good sign to see Alex Morgan play 60 minutes against Nigeria; they'll likely need her as the going gets tougher down the line.

The Men's Under-20 WC is still ongoing, down in New Zealand, but without the U.S., which lost to Serbia in the quarterfinals in a PK shootout... And the Copa America, the South American championship, runs through July 4; it's live on BeIN Sports.