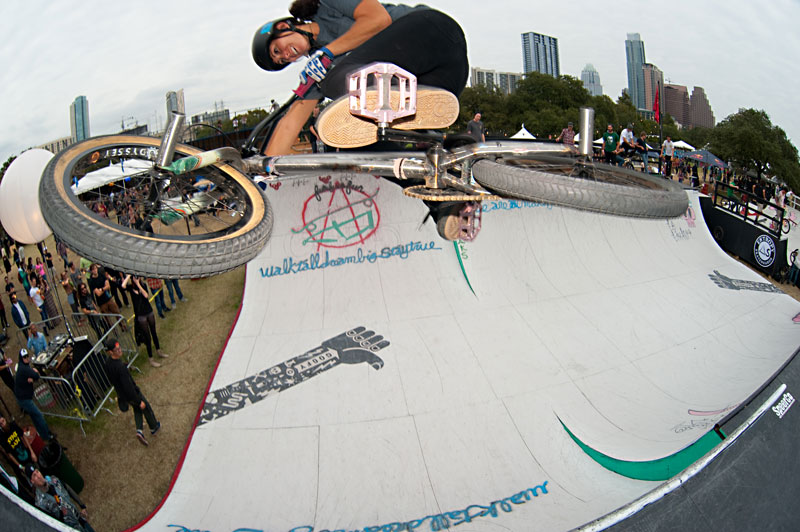 Many of the world's greatest extreme sport athletes ride into town this weekend for the X Games, a three-day event at Circuit of the Americas that includes skateboarding, Moto X, Rally Cars, and BMX. Metallica, Nicki Minaj, and big athletic names like Tony Hawk are scheduled for appearances, and Austin's own BMX gold medalist Chase Hawk will compete. The X Games is still a male-dominated affair – a week out from the competition, of the 48 "featured athletes" on the X Games official website, only six were women. But little by little, female competitors are making inroads – sometimes quite literally, in the case of New Zealand's Emma Gilmour, who was the first and only female driver to compete in the RallyCross event last year. In advance of this year's competition, we caught up with four extreme athletes to gain some perspective on riding while female. 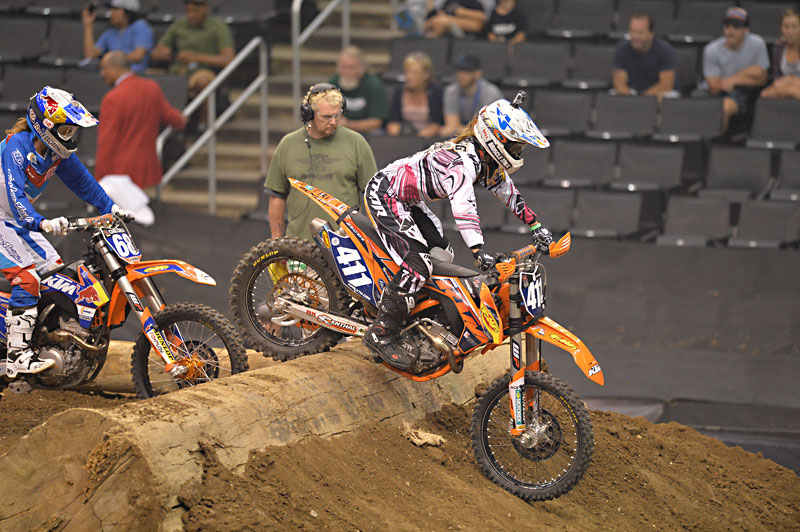 Maria Forsberg, the first woman ever to win gold in X Games Endurocross, competes again this year. Now the two-time gold medalist is also a mother. When asked the inevitable question "How do you do it all?" Forsberg says, "It doesn't bother me at all when people ask [that]. It's kind of hard to juggle both, but I wouldn't have it any other way. Motherhood is amazing, and I'm so glad I get to travel down this exciting wonderful road with my daughter." Trained as an electrician, with a background in off-road racing and downtime devoted to organic gardening, Forsberg is accustomed to wrong assumptions. "Some people judge you before they meet you or see you ride and they think they know what a motorcycle racer 'looks like' or 'acts [like],' and I think they should be more open-minded about women racers." 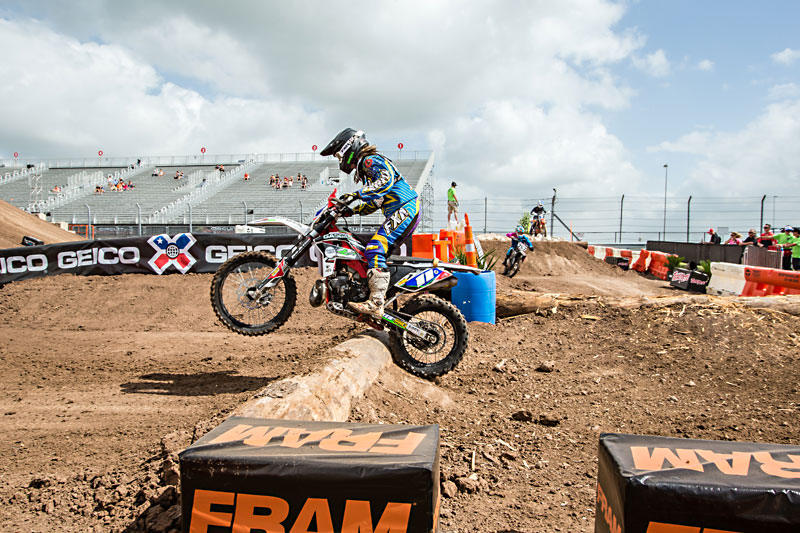 Canadian Moto rider Melissa Harten is really into adrenaline: She's also a full-time firefighter in Calgary. At a spry 31, she's frequently touted as the "oldest competitor" in her division. "Everyone talks about racing and being in your 'prime,' but for me that just wasn't an option. I sometimes think I would have been a ninja if I had a bike when I was a little kid and learned to ride then. That wasn't my reality. I never had any exposure to dirt bikes until I was 24 and a friend took me out for a ride. I don't think age matters as much in off-road and there's no rules!" She adds, "X Games Austin is the dream of a lifetime." However, she points out, "They still don't have anything in place for women's pro payout like they do with the men." 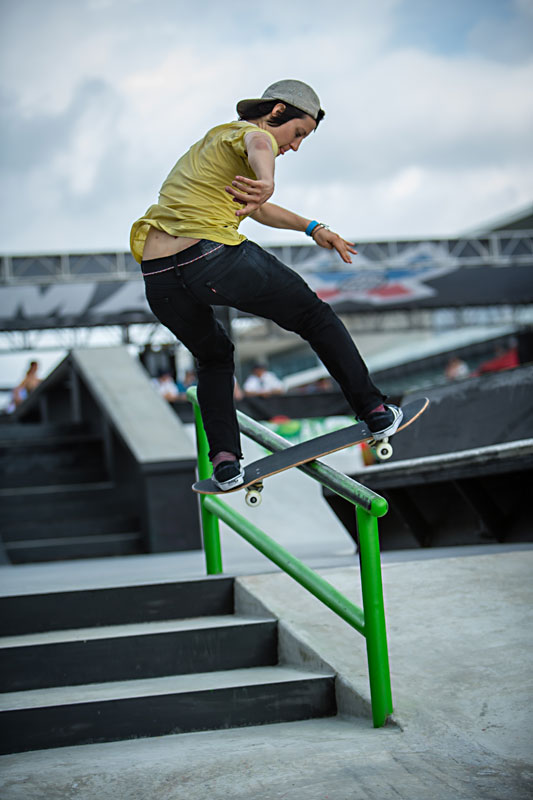 Alexis Sablone, on the other hand, did get an early start: At age 10, she was the lone skater in a small town. "I practiced every night in my garage and dragged a funbox around to smooth, lit parking lots around town." Now boasting two golds and two silvers, the Brooklyn, N.Y., pro is also an MIT architectural grad student who somehow finds time for sci-fi books, movie theatres, and art. When asked about the pros and cons of being a woman in a male-dominated sport, Sablone says, "I guess many sports are, but the fact that I'm a female has never held me back or pushed me. As a female, you certainly can't be discouraged by people that think some things are just for men, but you also have to be motivated by more than a desire to prove to people that you can [do] everything a guy can do. ... I grew up skating, either alone or with guys, but to me we were all just skaters."


Austinite Nina Buitrago's X Games experience is unique: She doesn't get to compete.

Car trouble in college gave Buitrago a golden chance to discover her passion. Without a car, she turned to a bike, and some BMX friends showed her the dirt jumps in their New York neighborhood. Instantly hooked, she entered an amateur contest about a year later. Fast-forward 12 years, and this competition-level local splits her time between bartending on Sixth Street, working at the Apple store, and trying to "grow the sport" for women – no easy feat, as it turns out. BMX does not have a competition women's division at X Games, an invite-only event. According to Buitrago, X Games cites ratings and budgetary reasons.

Recently named by ESPN as one of the 20 "Most Unstoppable Women in Action Sports," Buitrago says, "the level of girls riding BMX gets crazier and crazier" every year. With the famous Ninth Street jumps, several bike-friendly skate parks, and dirt trails like Walnut Creek, "Austin is somewhat of a mecca," she says. Support from our city's "big melting pot of fun people" also helps fuel the growing community. When she broke her jaw and several teeth after only a few months in town, strangers rallied. Buitrago jokes that's when she became an official BMX rider. "They're really good at bolting us back together nowadays."

More girls riding means more girls showcasing enormous skill sets on par with men's divisions, and that means more push in the right direction. It's just that the number of opportunities to compete still lags. The sheer volume of sponsors and participants gained by large-scale exposure like X Games Austin makes it ideal for recruits, and several years ago Buitrago and friends started teaching mini-clinics at the events. Equipped with rental bikes and helmets, they encourage crowd members and bystanders and show them how to ride.

It's not just Austin's scene that's booming. Aside from stateside events run by fellow riders, most women BMXers must travel overseas to compete at the upper levels. Women from South America, Europe, and Asia, even small towns in Russia, are jumping on board. "They had to put a cap on a [women's division] contest in Estonia due to time restraints. Every contest, you meet someone new that just rips," Buitrago says. A testament to the international ground she's covering, many of these women joined the ranks after receiving their inspirational BMX blips into the ether from a print/online women's BMX zine, Yeah Zine, founded by Buitrago and Angie Marino.

"We're progressing, but it's almost like we're muted or underground, at least from what everyone else sees. The BMX world knows, though. It's pretty frustrating to try to explain to anyone outside the BMX world why we don't have a girls' class because we still don't know, really."

Most male riders she's met are generally supportive, but there's still some boy-vs.-girl flak about competition in the sport. "What they need to realize is there are enough of us now that we should have our own thing. I mean, if they don't want to get beat by a girl, maybe they should give us our own class," she teases.

After much persistence, X Games threw 'em a bone. Last year, four female BMX riders, including Buitrago, were allowed to ride the street course during men's practice. Making good on the Games' (slow) efforts to progress, this year six women will be allowed to ride the BMX bowl park course on June 3 (there is no street contest) – a better opportunity to showcase the level of riding, despite still not being official or in front of the huge crowds. Maybe next year's X Games Austin will break a little glass.

X Games Austin 2015 takes place June 4-7 at the Circuit of the Americas. Visit xgames.espn.go.com for ticket info and schedule.