Your Austin Aztex match up against three MLS playoff teams, in double-headers Friday and Sunday 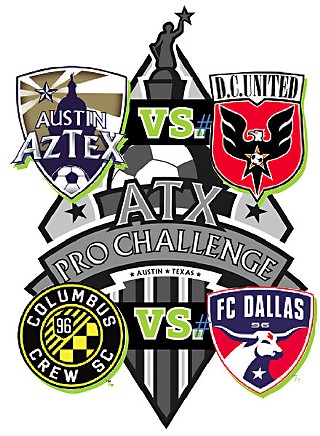 It's just preseason, but there's actually a lot on the line this weekend for the Austin Aztex: For the players, many of who have major-league ambitions. For the team, which has been practicing together for less than two weeks, but wants to prove that it can be successful on the pro level, as it was wildly successful for the last three years at the amateur level. And maybe most of all for the organization, which also has major-league ambitions, and wants to prove that Austin could be a major-league city. My guess is, the team will do just fine; despite the short time frame, head coach Paul Dalglish will have instilled a pretty good idea of an attacking game plan, even against three of the better teams in Major League Soccer (all three made the playoffs this year, and all will be playing their starters for at least part of the game).

The action kicks off at 5:45pm Friday, Feb. 13, with FC Dallas facing Aztex affiliate Columbus Crew SC in one semifinal, followed by the Aztex taking the field for the first time, taking on four-time MLS champion DC United at 8pm. Then on Sunday, the losers of those games play in a third-place game at 1pm, followed by the championship match at 3:15pm. Time Warner Cable SportsChannel will broadcast all four matches live. Games will be played by full FIFA rules, except with unlimited substitutions, and no overtime periods; ties after regulation will be decided by PK shootout.

And yes, there will be beer!