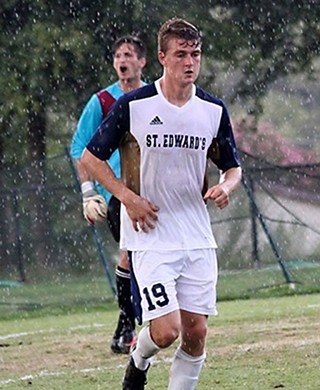 Andrew Fox is the top scorer for the St. Edward's Hilltoppers.

The Texas Longhorns take on 11th-ranked Kansas this Friday, Oct. 10 at 7pm – their fourth straight home game against a ranked opponent. Only two home games left in the season after that. A frigid 1-0 win at Iowa State last Friday night put the Horns at 7-4-2, and 2-1 in the Big 12, but the pollsters still only see them as the fifth-best team in the conference. So this Kansas game could mark a turning point in the season: Win, and they're in the mix for the Big 12 lead; lose and they're likely stuck in the middle of the pack.

St. Edward's men and women swept a pair of doubleheaders at Dallas Baptist and Oklahoma Christian last weekend to open Heartland Conference play. This weekend, they host two more double bills, Newman on Saturday and Rogers State on Monday (women at noon, men at 2:30pm both days). The Hilltopper men are unbeaten in their last seven games, all on the road; they're now 7-2-1, with a No. 23 national ranking. Andrew Fox, who played with the Aztex last year, leads the team in both goals and assists.

There are Euro 2016 qualifiers this Thursday through Tuesday, Oct. 9-14, across various Fox and ESPN networks, plus two USA games on ESPN: Friday, Oct. 10, 6pm, vs. Ecuador – Landon Donovan's final game for the USA – and Tuesday, Oct. 14, 7pm, vs. Honduras.