Soccer Watch: A Pro Team, and a Soccer-Specific Stadium? 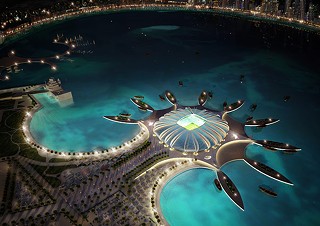 No, it won't look anything like this WC stadium being planned for Doha, Qatar.

A pro team, and a soccer-specific stadium. It's no secret that those twin goals have long been at the top of the wish list for the Austin soccer community. And there was some serious action on that front this week, as: A local project group stepped up its efforts aimed at building a stadium and bringing in an MLS franchise; the existing Austin Aztex franchise reiterated its long-stated plan to move up to the pro ranks and, yes, get a stadium built; and Mayor Pro Tem Sheryl Cole took the lead in preparing a City Council resolution in support of such efforts.

The current flurry of activity was kicked off by Michael Wilt, who has a history in local development, planning, and Democratic Party circles, and is one of the principles in a group which incorporated on Wednesday as Austin FC, LLC. Among the various contacts he's been making, he's talked to several City Council members about how the city could aid the process – though he vows he won't be asking for any local public funding.

For his part, Aztex founder David Markley didn't want to comment publicly about what the Aztex are working on currently, but he called this "a very beneficial development," and pointed toward the team's mission statement, which says in part: "We will also work with community leaders to be a catalyst for a soccer specific stadium, but first we will establish the economic viability of our franchise to support this future goal."

Meanwhile, Major League Soccer continues to drop hints about future expansion sites, and Austin keeps getting mentioned as an A-list option (see "Soccer Watch," Dec. 6, 2013) – though the prerequisites remain the same: a solid ownership group and a Downtown stadium.

MPT Cole's office has been taking meetings, and working on a City Council resolution that [in its draft version] "directs the City Manager to work with necessary stakeholders including Major League Soccer, the Aztex, neighborhood groups, the University of Texas, and identify other probable stakeholders to (1) identify the economic feasibility of a Major League Soccer franchise in Austin, and (2) identify potential sites that take into account the traffic impact and impact on surrounding neighborhoods."

One of those stakeholders, presumably, might be Mark Pannes of Raptor Accelerator, part of the group which owns AS Roma, and is about to unveil one of the most anticipated stadium projects in the world, in a city that knows a thing or two about sports coliseums – not to mention bureaucratic red tape and neighborhood politics. It is not lost on anyone that the man who is overseeing that project for Raptor is right here in Austin.

There are some serious money figures being thrown around: $100 million for an MLS franchise, another $100 million for a stadium, and another $30 million if you want to put on a retractable roof to enable indoor events (such as UT basketball, which is looking for a home for when the Erwin Center is torn down to make way for the new medical school). That's a whole lot of moving parts, and there will be a lot more drama before any ground is broken – but, hey, the game is afoot. Let's see where it goes.


I did promise to post here a preliminary draft of the resolution being prepared for consideration by the City Council, but with revisions still ongoing, Mayor Pro Tem Cole's office requested that not be publicized at this time, to avoid confusion over what's in the current text. I'll update this as time allows. 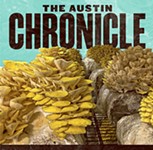 We Have an Issue: Finding Inspiration in the “Best of Austin”
Check out the nearly 900 (!!) people and places nominated in our "Best of Austin" Readers Poll