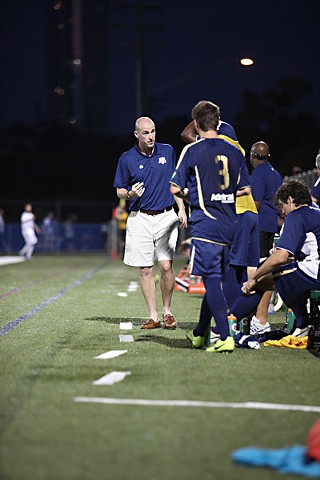 A couple of big pieces of news out of the Austin Aztex camp this week:

The Aztex announced Wednesday that Paul Dalglish, the only head coach the franchise has had, will be leaving to join the coaching staff of Major League Soccer's Real Salt Lake. Dalglish finishes with a 26-8-4 record in two seasons in all competitions, after guiding the Aztex to a PDL league championship in 2013, and being named PDL Coach of the Year.

The defending PDL champions "have several strong candidates for the next head coach and are working to name the next coach within the next week," said Aztex CEO David Markley in the announcement, after thanking Dalglish profusely for what he's accomplished here, and for his "passion for developing our squad to be great players on the field, and better men off of it."

Dalglish will certainly be missed. When he came to the Aztex, he was best known as the son of former Liverpool legend (and then-Liver­pool coach) Kenny Dalglish. Two years later, dad's gone from Liverpool, but his son is building a big reputation for player development. In 2012, three players off the Aztex roster got drafted among the top 11 picks in the MLS SuperDraft, and made the jump all the way from amateur PDL to MLS. In 2013, Dripping Springs native Kris Tyrpak became the PDL Player of the Year, and he's headed to the MLS combine this week.

Ever the class act, Dalglish sent a letter to his players, thanking them and the club, saying he has "no doubt that the Aztex will continue to be the ultimate team to play for in the PDL," and concluding, "Thanks again and nothing would give me more pleasure than to see you guys go out and bring another championship home to Austin, TX."

In other news, I got a preview of the Aztex' 2014 schedule this week: They'll play a 14-game regular season, running from May 10 through July 17, in a restructured PDL Mid South Division. Oklahoma City and El Paso are gone from PDL – after a dueling-lawsuits franchise battle in OKC, and a deteriorating management situation in EP – and the Mississippi Brilla (based in Jackson) are back, after five years in the all-Floridian PDL Southeast. The Aztex will play four games each against the Houston Dutch Lions and Midland/Odessa Sockers, and three each against the Brilla and Laredo Heat. All home games are at 7:30pm at House Park (13th & Lamar), five of them on Saturdays, the final two on a Friday and a Thursday.

And after all that, it feels a bit anticlimactic to report that the Aztex held their first try-outs this weekend, for returning and invited players, with a lot of familiar faces from last year, and some highly-touted newcomers. Looks like it's going to be another killer team.

Elsewhere, the National Soccer Coaches Association of America has added a "Gay, Les­bian and Ally" page to the resources available on its web site. First question in the FAQs: "I'm not sure why this should be an issue for the NSCAA. Who cares if someone is gay? A: You're exactly right ..." See www.nscaa.com/membership/diversity-and-inclusion/gay-lesbian-and-ally.