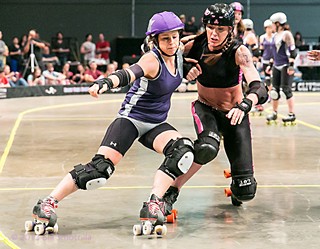 The home season is over, but in flat track Roller Derby, that means one thing: The travel teams are breaking out their fastest wheels. This weekend, the Texas Rollergirls find themselves in the middle of a pincer movement as Dallas and Houston send their biggest and baddest. Currently ranked sixth in the nation by the Women's Flat Track Derby Association, Austin's own Texecutioners will likely treat this as a warm-up for the big challenge, a Sept. 13 showdown at the WFTDA divisional playoffs in Richmond, Va. A win this weekend over the Houston All-Stars will cement the Texecutioners' reputation as the top dog in Texas. Then again, it's a chance for No. 26 Hous­ton to put the screws to the state's top team. The All-Stars arrive in Asheville, N.C., Sept. 22 for their own round of playoffs, and a win over the Texies could set them up as the circuit's dark horse contenders. Meanwhile, ATX B-team the Firing Squad may not be tournament bound, but they'd like to turn Dallas' Assassination City Conspiracy into cannon fodder.