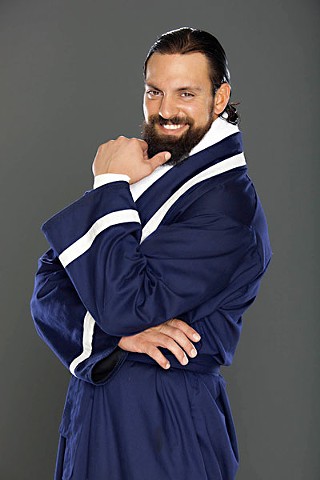 To the victor, the spoils. At WWE's Money in the Bank pay-per-view, Damien Sandow (pictured) snatched a guaranteed shot at the World Heavyweight championship. Others have done so before, to be dubbed "Mister Money in the Bank." Yet for the ever-eloquent and self-proclaimed intellectual savior of the masses, that title is insufficient. To that end, he declared, "I shall separate myself and, from this point on, call myself 'Sir Money in the Bank.'"

As per the stipulations of the contract, Sandow can cash in his title shot at any moment. That means Monday night's audience at the Frank Erwin Center could see an impromptu and instantaneous match between himself and the current heavyweight champ, Alberto Del Rio. Sandow explained, "I will wait for the perfect moment, and I assure you that once I get the title, I plan on retiring with it." Not that he would reveal when that perfect moment could be. He mused, "If I revealed my strategy, that wouldn't be very smart, would it?"

Sandow described his Money in the Bank victory as "the most heroic, heartfelt and triumphant in the history of the WWE. Period." But he literally cast aside his longtime tag team partner Cody Rhodes to procure the win. Yet he is convinced that there will be no repercussions for that act when he faces Rhodes. "I'm sure he's fine with it. I don't understand why he wouldn't be."

Of course, Sandow is no mere grunting grappler. How will the WWE's intellect par excellence keep himself mentally stimulated on his trip to Austin? Maybe a visit to the LBJ Presidential library? Indubitably. In fact, he said. "Several members of the Sandow family have their works in the library itself."

Any final words from the bearded Braggadochio? "You're welcome."