It's a flat-track Roller Derby doubleheader 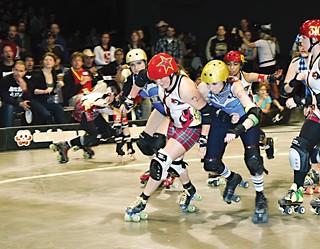 Flat-track Roller Derby is nothing if not volatile. February's season opener saw reigning champions the Hell Marys take a humbling 222-156 defeat at the wheels of 2012 silver medalists the Hotrod Honeys. The Hells know they face an uphill struggle this year, after losing three key players – Barbara Ambush, Polly Gone, and Luce Bandit – to the Texecutioners travel team. Now that their five rookies have a little track time, they'll face this year's most powerful threat, the Honky Tonk Heartbreakers. With a jammer roster that would make New York's all-powerful Gotham Rollergirls nervous, this could be their first real crack at the championship since their 2004-06 run. The gingham assassins proved their mettle last month in their decisive 300-127 win over the Hustlers, and those purple-clad divas know exactly how the Hells feel. They took the title in 2011, but never regained their balance last year. This Saturday, they have a chance to break their hard-luck streak when they face the Hotrods in the opening bout.