Ash gets the nod despite McCoy's heroics against KU 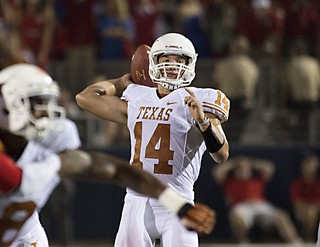 Mack to Case: "We're not in Kansas anymore."

The Wizard of Obvious, Texas head coach Mack Brown, has tapped his rose-colored Nike slippers together and said, three times, "There's no QB like Ash."

On Monday, Brown announced that David Ash, who was about as effective against Kansas as the ash some Catholics put on their foreheads the first day of Lent, will return as starter Saturday against Texas Tech. In last week's KU game, reserve quarterback Case McCoy engineered two fourth-quarter drives to win 21-17 with 12 seconds left. But even after such heroics in the face of what would've been a long flight home on Laughing Stock Airways ("plenty of room for the tail between your legs"), McCoy's name on the depth chart remains Justin Case.

You see, Ash is the taller quarterback with the stronger arm. He has potential to one day play in the NFL. Like Chris Simms of a few years back. Ironically, the less physically gifted QB who was a proven winner, yet sat on the bench while Simms choked time after time, was Texas co-offensive coordinator Major Applewhite. Ash/McCoy isn't quite Simms/Applewhite. Ash was not the nation's No. 1 rated quarterback out of high school. And McCoy was not the starter before Ash came to campus on a Jetstream of promises.

But McCoy probably saved coach Brown's job on Saturday. He deserves a start, not a headset. On Saturday, I wrote that "after Baby Colt's heroics, Lindsay Lohan may host SNL again before Ash gets back in the starting lineup." Better check my TV Guide.

It could be that the 2:30pm kickoff against Tech (to air on ABC) had something to do with the decision. Ash has performed very well this season except for the two 11am games – against Oklahoma and Kansas – when he played like he'd been doing Everclear gelatin shots the night before. ("Hey, this Jell-O tastes weird.")

It also could be that Texas Tech is going to try to jump on Texas early, and Ash seems steadier in the pocket during certain defeat. Oh, yeah, Tech's gonna whomp the Horns like they did West Virginia a few weeks back, turning those Mountaineers, fresh off a win at Texas, into Coal Miners' Daughters. This looks to be Austin's biggest Tech loss since Agillion went under. Red Raider quarterback Seth Doege's last name will be pronounced "Dirge" on Saturday. Marching toward certain defeat against the hated Red Raiders is like preparing for evasive surgery. Powerful medication will flow Saturday afternoon. Horns fans are going to be getting in their cars so drunk, they thought APD had declared a "Don't Ask, Don't Tell" weekend, instead of "No Refusal."

Such pessimism is rooted in last week's pitiful show at Larry, Kan. Usually the defense, trained to tackle by matadors, is the scapegoat, but against 1-7 Kansas, it was the offense. Until McCoy threw off the headphones like a starving DJ at an empty nightclub when the pizza arrives, Texas had scored just seven points in three quarters. Ash threw well behind receivers for two interceptions and it started to look like The Garrett Gilbert Story, so Mack changed the channel.

The game-winner came on a lob from McCoy to a wide-open D.J. Grant on third-and-goal from the one. Texas was trailing by three at the time, so here's a hypothetical: Would Coach Caution have called for a game-tying field goal if Case didn't convert? Of course he would've taken overtime vs. a risk. Mack wears a helmet on the stationary bike.

The play of the game was a 16-yard pass from McCoy to Jaxon Shipley on fourth-and-six with just under two minutes left. If they don't hook up like their older bros, the needy Longhorn Network would be taxing the time of other coaches next year. Forget saving face, McCoy, Shipley, Grant, Marquise Goodwin, Magic Mike, and Johnathan Gray saved Mack Brown's ass. Kudos to Gray for his first 100-plus rushing game (18 carries for 111). There will be many more; da frosh prince can play.

Texas (6-2) is now bowl eligible, the new standard at DeLossville. And coach Brown, who called a time out at the right time (and an angel gets her wings), before a fumbled snap, gets to answer questions at the post-gamer about subjects other than his job security.

Quandre Diggs, meanwhile, was able to sleep Saturday night. (I know because there were no tweets for eight hours). The defensive back, whose brother is Senseless Grabber, or, rather, Quentin Jammer of the NFL, interfered with a Jayhawk receiver so badly on a third-and-nine that he left DNA evidence. KU kept the drive going late in the fourth quarter and kicked the go-ahead FG with a little over three minutes left. Jayhawk fans are so cute when they think they're going to win.

But then along came Jesus Brother No. 2 to lead the team like he had holy water in his veins. Thank your lord and savior Jesus Christ all you want, Mr. Case McCoy. You spared Longwhine Nation from the humiliation of losing to another boring Midwestern college whose team is stocked with players from Texas that the Horns recruiters didn't want. McCoy threw for more yards (68) in the last quarter than Ash did (63) in the previous three, to keep Texas from joining only South Dakota State in the Kansas win column.

Even though he'll start on the bench against Tech, McCoy has the confidence to get in there and get the job done. The Five Million Dollar Coach knows that better than anyone. But, for the Horns sake, I hope we never see Justin Case McCoy. It'll mean we're still in the game.

After Tech, look for a Thanksgiving evening win against TCU, who just got stomped up in Stillwater 36-14. I don't even want to think about what the boring evil genius Bill Snyder is going to do to us at K-State on Dec. 1. The Wildcats will probably be in a position to play Alabama for the national championship if they beat Texas, which doesn't seem to have the spoiler attitude. More like "Bon Voyage!" That leaves Mack Brown with a 7-4 season, which keeps his pace of about $800,000 per victory.