Head to Pinballz for this super tournament 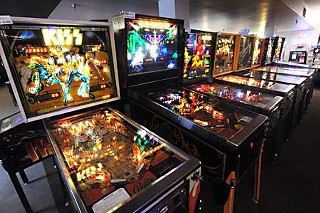 Austin's pinball palace, the almighty Pinballz Arcade, is hosting a "Battle the Bat" pinball tourney to be played on their three Batman-themed machines – Batman Forever (Sega), Batman: Dark Knight (Stern), and Batman (Data East). The contest will consist of a "limited entry, points-based qualifying round, followed by a top-eight double-elimination final," with the winners receiving tokens, gift certificates, and a trophy to be cherished for years to come. So don your finest Batman apparel, shake off those carpal tunnel symptoms, and head to Pinballz for this super tournament.