The Austin Aztex hold their first tryout this weekend. It's invitation only for players who've already been on the team's radar; so if you're thinking of trying out, you probably ought to wait for the second "community tryout" on April 7 (contact Ric Granryd at tryouts@austinaztex.com for info). Meanwhile, though, the general public's invited to drop by, get a feel for the team, and maybe spot some of the players who'll be sporting Aztex blue-and-gold by the end of next month. Sat­ur­day, March 10, 9am-5pm, Kelly Reeves Ath­letic Complex, 10211 W. Parmer...

Speaking of the blue-and-gold, I got a preview of the uniform designs for the Aztex's new custom-made kits (and you'd be surprised how rare that is), and they look sweet! Not sure when the official unveiling is.

Arsenal was the first team out of the European Champions League round of 16, with a 3-0 home win Tuesday not enough to overcome an 0-4 first game at AC Milan. Also through to the final eight: Barcelona, Benfica, and, in a major upset, Cypriot minnows Apoel Nicosia beat Lyon. This week's games will be on TV here an hour later than usual, 2:45pm, because we'll have started daylight savings time on Sunday, while Europe doesn't start until March 25. Anyway, it's Bayern Munich vs. Basel and Inter Milan vs. Marseille on Tuesday; Chelsea vs. Napoli and Real Madrid vs. CSKA Moscow on Wednesday.

The CONCACAF Champions League quarterfinals are under way as well, with the Seattle vs. Santos and the Toronto vs. LA Galaxy opening games being played as we go to press. The return legs will be Wed­nes­day night, March 14, 7 & 9pm on FSC, but you'll be at the Austin Music Awards, of course, so set the DVR.

The MLS season kicks off this weekend with games televised on ESPN2, NBC Sports, Galavision, and MLS Direct Kick. 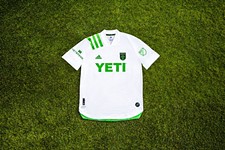