Longhorns continue to shine, and more 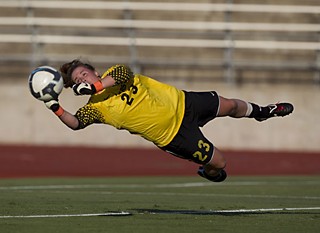 The Texas Longhorns continue to shine, with a pair of 2-0 wins over UTSA and Dartmouth last weekend; junior goalkeeper Alexa Gaul was named Big 12 Defensive Player of the Week for the two shutouts, plus a rare goalie assist. The Horns face a tough interregional test this week in Los Angeles against USC and San Diego, then get ACL weekend off before starting the conference schedule at home Sept. 23.

The St. Edward's women got off to a strong start as well, moving up to No. 4 in the nation in Division 2 after beating Angelo State, 2-1, and Washburn, 4-0. They have two more home games this week: Missouri Southern, Friday, Sept. 9, 5pm, and Texas Woman's, Tuesday, Sept. 13, 4pm, sandwiched around a Sunday trip to Texas A&M-Commerce. The Hilltopper men host Lindenwood, Sunday, Sept. 11, 1pm.

Orlando City overcame all-league goalie Miguel Gallardo's red-card ejection just after halftime and won the USL-PRO title over Harrisburg Saturday in a penalty shoot­-out after a wild 2-2 draw, with all four goals coming after the 89th minute. Announced attendance at the Citrus Bowl was a league-record 11,220.

The U.S. Men looked largely toothless in a pair of 1-0 losses to Costa Rica and Belgium, while in Euro2012 qualifying, all the powerhouses solidified their positions in the next-to-last set of games, and it looks like the 16-team field will include the top four teams in the world (Holland, Spain, Germany, and England), 13 of the top 19, and no qualifier ranked lower than 24th. No easy groups there.

Pelada (Spanish for "pickup game") is a charming documentary that premiered at SXSW 2010 – by and about Luke and Gwendolyn, two former college soccer stars who quit their jobs and take off to play pickup soccer around the world and make this doc. Highly recommended. The screening benefits the Multicultural Refugee Coalition and MRC United, an Austin refugee soccer team with members from Burundi, Colombia, Congo, Eritrea, Ethiopia, Iraq, Liberia, and Palestine. Monday, Sept. 12, 7pm, at Alamo Village, 2700 W. Anderson.