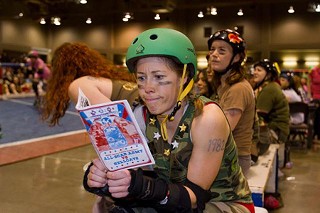 Ten years ago this month, a group of Austin women met at Casino el Camino to discuss reviving skating as a full-contact sport. That may not sound like much of an anniversary, but in the annals of Roller Derby history, it's pretty essential. That gathering was the trigger for the modern derby revolution, and from it flowed every flat-track, banked-track, peewee, and rec league around the planet. That anniversary also means Austin's own banked-track bruisers, the TXRD Lonestar Rollergirls, get to proudly announce they'll be starting their 10th anniversary season with a mixed-up extravaganza this Sunday, Sunday, Sunday. Rather than the traditional season kickoff, where last year's champs take on the best of the rest, this time it's two pickup squads. The All-Scar Army, led by Kategory 5, hit the jam line against captain Rocky Casbah's United Skates Navy. Unfortunately, they'll be doing it without Lyka Boss, who broke her humerus while arm wrestling during last weekend's season kickoff event at the Highball. You can donate to the TXRD injured skaters fund at www.txrd.com: 100% of all contributions go toward getting skaters hale, hearty, and back on the track. TXRD Lonestar Roller­girls season opener: Sun., Jan. 30, 7pm (doors 6pm). Palmer Events Center, 900 Barton Springs Rd. $15.