UT Longhorns get set to start, first-place Aztex hit the road, and more 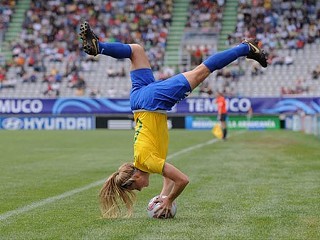 Leah takes a throw-in for Brazil.

The UT Longhorns start their season Saturday night with an exhibition game against the LSU Tigers (Aug. 14, 7pm; Mike A. Myers Stadium, 707 Clyde Littlefield Dr.). Admission is free, and the team will sign autographs afterward. The Horns return 10 regular starters from last season, including redshirt freshman Leah Fortune, who played only three games last year before a season-ending injury. She's a talented striker, raised in Chicago, and likely to be UT's top scorer; she was born in Brazil, where – known simply as "Leah" – she's a starting defender on the national under-20 team and scored a goal at this summer's U-20 World Cup. Another intriguing newcomer on the squad: junior Stacey-Ann Smith, who's a two-time all-American 400-meter runner on the UT track team, and a gold medalist at this summer's World Junior Outdoor Championships.

The Austin Aztex got another good win Saturday night, beating the Tampa Bay Rowdies 4-2 to extend their lead atop the D2 league standings and edge closer to clinching a playoff spot. Jamie Watson's two assists moved him up to fourth in the league scoring table, but he also suffered a fractured shoulder that'll keep him out of action at least a couple of weeks. Now comes the strenuous travel portion of the Aztex's schedule; eight of their last 11 games are on the road, starting this Saturday in Puerto Rico. The next home game, hosting the Carolina Railhawks, is next Sunday, Aug. 22, 6pm, a "Made in Texas" night honoring local businesses and the Austin Independent Business Alliance, as well as the team's Texas-bred players.

Tuesday-Wednesday was the first international game day since the World Cup, with some 40 matches around the world. The USA was thoroughly dominated by a young Brazilian squad before 77,000 fans in New York; the 2-0 loss may have been coach Bob Bradley's last game in charge. Elsewhere, England came from behind to beat Hungary 2-1 at Wembley Stadium on two goals by Steven Gerrard; a thoroughly disheveled France fell to Norway, also 2-1; and Mexico tied world champion Spain 1-1 in Mexico City on a goal by Javier "Chicharito" Hernandez; that's as many goals as Spain gave up in their seven World Cup matches... Also Wednesday, after we went to press, was the first leg of the Copa Libertadores final, matching Brazil's Internacional against Chivas of Guadalajara; the second leg is Wednesday, Aug. 18, 8pm, live on Fox Sports Español.

The English Premier League kicks off this weekend, highlighted by Liverpool-Arsenal (live on FSC at 10am Sunday). France and Holland started last week, along with the early rounds of the Champions League and Europa League; everyone else opens in the next couple of weeks.

Belated congrats to the girls of Austin Lonestars 91 Red, who won the Under-19 national championship on July 25 in Kansas City, beating two-time champs Eclipse Select of Illinois in a penalty-kick shootout after ending 1-1 in regulation and overtime. It's the first national title for the Lonestars, and the first girls' title ever for a team from South Texas.