(Along with that Phelps guy) 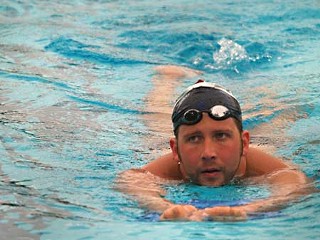 Of the 22 men who will be swimming on the United States Olympic team, more than a third live in Austin and train with Longhorn Aquatics. Yes, the reigning king of the sport, Michael Phelps, does pretty well for himself swimming out of Ann Arbor, Mich. As every sentient person in America probably knows, Phelps has his sights set on winning a record eight gold medals in Beijing, and even if he falls short, no other swimmer will likely come close to rivaling his medal haul. Collectively, however, the Austin men could leave the Beijing National Aquatic Center (known as the "Water Cube") with more gold, silver, and bronze than any other country suiting up.

"The focus has been on Michael," admits world-record holder and UT grad Ian Crocker. "But if you look at what we've done at UT, we've done everything that Michael has done. It has just taken a few of us to do it."

The remark is characteristic of the Austin swimmers, revealing both their sense of esprit de corps and their unassuming sense of humor.

"We more or less, in the last six years, have grown up together, have gone through college together, know the ins and outs of each other extremely well," Aaron Peirsol said of Crocker and Brendan Hansen, the trio that form the core of the Austin contingent that trains under the keen eyes of coaches Eddie Reese and Kris Kubik. "We've all helped each other, not just physically but letting each other know we belong here, and that is half the battle. It really is."

Spend any time at all with these guys at the UT Swimming Center, and the thing you notice is an utter lack of egoism. As fiercely competitive as they are in the water, they don't take themselves too seriously out of it. Crocker has been open about his battle with depression. Garrett Weber-Gale, who has considered going to culinary school, has snippets of himself cooking his own recipes on YouTube. And Peirsol, the California surfer dude (though he's been in Austin for the last six years), is so laid-back that on the flight back from Athens in '04 he checked his three gold medals – and wasn't fazed when his bags got temporarily lost.

Maybe he was thinking that he'd have no trouble replacing them in Beijing. Indeed, for all his devil-may-care charm, the backstroker has lost only once in the last seven years. At last month's trials in Omaha, Neb., he won the 100-meter and 200-meter backstroke, setting world records in both events.

The point of the Olympics, they say, is not to win but to take part. But make no mistake: The Austin swimmers do expect to win – Peirsol in the backstroke, Hansen in the 100-meter breaststroke, Scott Spann and Eric Shanteau in the 200-meter breaststroke, and Weber-Gale, one of the surprises of the trials, in the 50- and 100-meter freestyle. (Although they won't be swimming in individual events, Ricky Berens and David Walters will be participating in the 800-meter relay. The only Austin-based woman swimming in Beijing – world-record holder and assistant UT coach Kirsty Coventry – will be representing her native Zimbabwe. Atlanta's Kathleen Hersey, swimming in the 200-meter butterfly, will be a Longhorn soon enough, enrolling as a freshman after the Beijing games.)

Peirsol is mindful to point out that "no one owns a race," and for good reason. Considered a lock to gold in the 200, he beat Florida's Ryan Lochte by only 0.02 seconds in Omaha. The others may have an even tougher time of it in Beijing.

For Crocker to take the gold in the 100-meter butterfly, he'll have to beat Phelps, the best swimmer in history – in itself no easy feat (Phelps smoked him in the trials, but Crocker still holds the world record in the event), but all the more difficult if it will mean single-handedly ruining the biggest story of the games. Not that any of that seems to be interfering with Crocker's plans. "The 100 fly was the gift I was given, so you have to shake your moneymaker in what you do," he said at the trials.

Hansen has his own longstanding rivalry with Kosuke Kitajima of Japan motivating him. Best known to Americans for his obnoxious yelling after a win, Kitajima beat Hansen in both the 100- and 200-meter breaststroke in Athens. In the years since, no sooner has Hansen set a world record than the 5-foot-8-inch Kitajima has done him one better. As a result, Hansen is more famous in Japan than Phelps, attracting swarms of Japanese sportswriters eager to play up the rivalry. "I was the guy with the target on his chest three weeks ago," Hansen told them. "Now he breaks [my] record, and he's got the target on his chest. I'm a good hunter; that's what I do."

Problem is, Hansen didn't quite deliver. After winning at 100 meters, he placed a dismaying fourth in the 200 and won't be competing in that event. Fortunately, Spann and Shanteau will. "Part of me won tonight because I taught those guys everything I know for the last six or eight months," he said after his loss. "I'm going to show these guys what they need to do to beat [Kitajima]. Because if I can't do it, I'm going to make sure that they do."

If Shanteau somehow manages to be the one to do that, for Americans it will be the feel-good story of the Olympics. During the trials, the Auburn grad barely got mentioned in NBC's coverage. Even after making the team with a second-place finish behind Spann (who in April transferred from Michigan to UT), Shanteau himself was oddly subdued. A few days later, in a team meeting, everyone found out why: A week before the trials, Shanteau learned that he had testicular cancer.

"I was sort of like: 'This isn't real. There's no way this is happening to me right now,'" he told the Associated Press. "You're trying to get ready for the Olympics, and you just get this huge bomb dropped on you."

Making the team presented Shanteau with an awful dilemma: either compete in Beijing and risk having the cancer spread or get the necessary surgery and kiss the experience he'd spent a lifetime working for goodbye. Since testicular cancer typically spreads slowly and is highly treatable, Shanteau and his doctors decided to put off any medical procedures till after the games.

"If he's happy and content with playing it out this way, that's the most important thing," Dr. Brett Baker, his urologist, said.

"Happy and content" may not be the words for what Shanteau has been feeling, but even if he doesn't medal – and his odds were never great, cancer or no cancer – he has already become the inspiration of the team, as well as drawing plaudits from cancer survivor Lance Armstrong. "I think at the Olympics he will swim like a man possessed," Armstrong told The New York Times. "Cancer survivors from all over the world will say, 'This is our guy.' I think it's a powerful force."

The sheer exuberance of youth is a powerful force of its own, and it's what Spann and Weber-Gale have going for themselves in Beijing. Jason Marsteller, an editor at Swimming World, which keeps close tabs on international competition, at first didn't give the young Longhorns much chance to medal. "They kind of came out of nowhere," he said. "They're really unknown. They could make it to the finals, I suppose." Then he started reviewing their performances. In the 50- and 100-meter freestyle, the 22-year-old Weber-Gale posted the third and fourth fastest times in the world in Omaha – faster even than Phelps. Spann's best is a full two seconds behind Kitajima, which ain't nothing, but he's also six years younger, which could help make up the difference.

"I feel like there are a lot of young wolves coming to eat the old wolves," Crocker said.