"Stone Cold" Steve Austin. The Undertaker. Booker T. Terry and Dory Funk Jr. The legendary Von Erich clan. When it comes to professional wrestling, some of the industry's biggest names have come from Texas. But for all that history, Austin has developed a reputation as "not a wrestling kinda town." Darin Childs, pro wrestler and the man behind rising Austin-based promotion Anarchy Championship Wrestling, is trying to change that. "We're all kinds of rebels and misfits who no one would take a chance on," said Childs. "That's how the Anarchy came about, because that's what we're about." But what ACW really means is a lot of hard work and management decisions that, after a year and a half, are starting to pay off. "We're definitely building up something that people can be really proud of," said Childs. The shift from wrestler to wrestling promoter came in 2006 when Childs, his longtime tag-team partner Jacob Ladder, and Austin-based wrestler Rachel Summerlyn were on the road, wrestling bouts across the Midwest. Childs decided it was time to bring pro wrestling back to Central Texas, where so many great names had worked before. "My goal was always to make a promotion where the tradition could live on," remarks Childs. 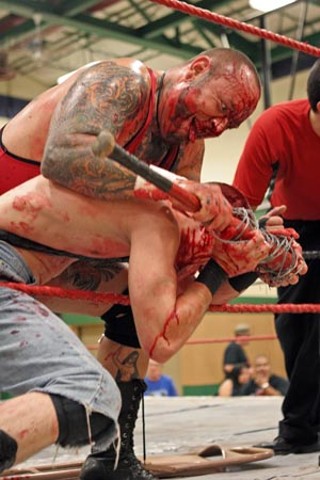 But it was a tradition that needed reviving. The potted history of American pro wrestling is that independent promoters split the country into territories administered by the National Wrestling Alliance, the industry's governing body. They tried not to poach each other's talent, their crowds, or their TV deals. In 1981, promoter Vincent Kennedy McMahon bought the World Wrestling Federation off his own father and set about dismantling the old territories by out-paying, out-promoting, and outselling every other promotion. Today, McMahon's company, now known as World Wrestling Entertainment, is the global standard in wrestling, with three top-rated TV shows (Monday Night Raw on the USA Network, Friday Night Smackdown on the CW, and ECW on the Sci Fi Channel) and a constant touring schedule: It just posted first quarter 2008 revenues of $162.6 million. Bar a few newer promotions, like Ring of Honor in Pennsylvania and Independent Wrestling Association Mid-South in Kentucky and smaller independent outfits scattered across the country, the territories are almost completely dead. The goal for Childs is, in some way, to revive that local loyalty in Austin.

But he had to start in San Antonio, long perceived as a wrestling town. Holding his first event on Jan. 14, 2007, Childs set himself a double challenge: Hold as many events as possible, and keep the quality high. In one year, he held 33 wrestling cards under the ACW banner, which in hindsight he called "ridiculous. We just wanted to see whether the territory system would work. In April, we had four shows just to see if we could do it. We did, but it was pretty rough." Having proved he could make ACW work in San Antonio, at the beginning of 2008 he started booking events in Austin and now alternates between the two on a monthly basis.

For a local wrestler like Summerlyn, having a reliable hometown promotion is significant. Part of the Putski dynasty of Texas wrestlers that produced legendary former NWA American tag-team champion Ivan "Polish Power" Putski, the lack of outlets and other female wrestlers to work with here almost made her move to Chicago. While she saw a dearth of female wrestlers in Texas, the WWE and its nearest rival, Total Nonstop Action Wrestling, had started taking their women's divisions seriously, hiring experienced women wrestlers rather than training models to become wrestlers. "I saw on a message board, 'Is this the golden age of women's wrestling?' and I really think it is," Summerlyn states. With better promotion in Texas, "I'm wrestling independent wrestlers like [former World Championship Wrestling cruiserweight champion] Daffney and [TNA title contender] Mickey Knuckles." Summerlyn still tours constantly: Being part of the ACW roster is like being in a house band that still gets to take the show on the road. "If you're in this business and you don't want travel, I don't understand it," she said. "I wouldn't have been to the places I've been if it wasn't for wrestling."

That travel is part of the uphill struggle that Childs faces. While he has attracted big-name indie talents like Jerry Lynn and "American Dragon" Bryan Danielson to earlier cards, and Chris Hero returns this week to ACW's event at Dove Springs Recreation Center, indie wrestlers are private contractors who try to book as many nights as close together as possible. "Texas is such a big state that it's really hard for the travel situation, and a lot of promoters won't pay to fly the guys in," said Childs. "Say you live in Austin. It's a 10-hour ride to El Paso, but if you live up in Philly, there's New York and Detroit and the Midwest right there." 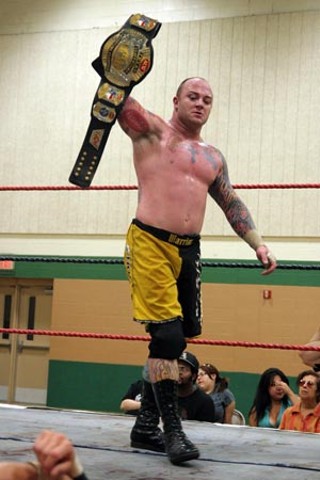 Many Texas wrestlers work in Mexico where they pick up elements of the high-flying dramatic style of the luchadores. In 2002, Childs spent a year in Mexico City with the Asistencia Asesoría y Administración promotion, working with big-name luchadores like Juventud Guerrera and Mr. Águila. "The language barrier played in how I wrestled, because it made me a better wrestler," he said. To get the crowd excited, and to tell the story of the match, he had to depend on his athletic abilities rather than the showmanship of bantering with the crowd. "It gave me a new appreciation for the business, and it gave my mom an opportunity to see me on TV."

That proximity to Mexico is part of what attracted ACW wrestler "One Man" Mike Dell to move to Austin. Dell grew up in New Jersey and studied wrestling under Gino Caruso at East Coast Professional Wrestling. He spent the first four years of his career working the Northeast circuit before moving to Austin in 2001. With no irony, considering his name, Dell holds down a full-time job with Apple and recently earned an associate degree in paralegal studies. At the same time, he got to wrestle big Mexican names like the skull-masked superstar La Parka. "He didn't know much English, and I was so nervous before that match. But the match came out so entertaining," said Dell. "La Parka gave me a hug."

Rachel Summerlyn (l) and the feisty Portia Perez duke it out. (Photo by Shelley Hiam)

Dell thanks Caruso for teaching him not just wrestling moves but how to be a real performer (pro wrestling is, after all, physical theatre). "I look back at my matches [for ECPW], and they were basic. But he wanted to make sure your matches were together, they were speedy, and you knew how to tell a story," said Dell. Having a regular promotion in Austin means he gets to work with the same people, building up a more complicated backstory (in wrestling parlance, an angle) than just bad guy (heel) against good guy (face), and letting him do more than just rerun the same match over and over again. "I always ask what the storyline is, so I know what the psychology is," he explained.

After 11 years in the ring, Dell has seen many Central Texas promotions fail and has the scars, bruises, and broken promoter's promises to prove it. "It's been a long road, and I have my aches and pains," he said, but he's putting his faith in Childs' ability to succeed where other promoters have failed. "If anyone's going to do it, it'll be ACW," he said. 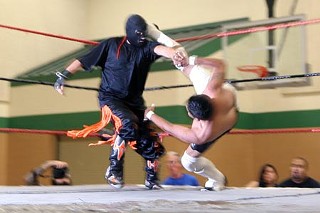 The Black Rocker (with mask) receives a kick from Junior Garza. (Photo by Shelley Hiam)

What Childs says he is not trying to do is compete with the WWE: His is a small start-up company, and he sees the last year and a half as investment time, building up credibility and brand awareness. "A lot of people want to pinch pennies to say that they're in the business to be in the business," he said. "Business practices that wouldn't be acceptable anywhere else are acceptable in wrestling. I don't want to be the guy that leaves the wrestlers stuck at the airport. Everyone's check clears." Having toured extensively, he has credibility on the wrestling circuit with workers that trusted him with their safety and now trust him as a promoter. "It's all completely because of the hard work we put in on the road. I have these friends who aren't just looking for a payday and really want to help."