Wranglers share hot dogs and tax brackets with their fans 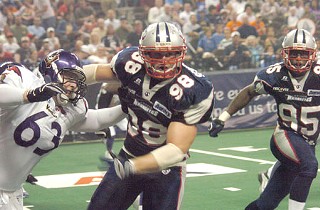 He's been in the league less than a year, but rookie lineman Rob Schroeder has the Arena Football League pegged.

"It's like playing football in a hockey rink," he says. That's also a good description for the disorientation you feel as a first-time AFL spectator, seeing 16 regulation-sized athletes crammed on a half-sized field. A guy like Schroeder (6 feet 4 inches, 285 pounds) looks even more out of place – like your big brother standing on your electric football game.

Veteran defensive back Damon Mason (5 feet 9 inches, 185 pounds) had a different impression. "I remember the first time I heard about Arena, I was like, 'Man, I would never play that. That's suicide.'"

Considering Mason's survived 10 years in the league, we can assume his first impression was wrong, but the league's not easy on its DBs. The thinner, shorter field (50 yards by 85 feet) begs for passing; strong-arm quarterbacks can take a touchdown shot from their own end zones. Plus, unlike the NFL or NCAA, one of the receivers is allowed a running start to the line of scrimmage before the ball is snapped.

"The biggest surprise when I started was having a guy back up 10 yards and come running at you full speed every play," Mason said, and he's not the only one caught off guard by the different rule. First-time fans often spend the first few quarters yelling for offsides flags. (For more differences between the NFL and AFL see rules, below.)

And a recent rule change has made coverage even harder. Unlike past seasons, when the league restricted when and how players could be substituted, this year players can be switched out at any time. So now the chances are much better that the guy running full speed at Mason in the third or fourth quarter is fresh off the bench.

The rule change, in addition to keeping Mason moving, brings the AFL's rules closer to the NFL's and quickens the game's already ridiculous pace. Arena games typically play out like SportsCenter highlight reels, usually with either nonstop scoring or heroic defensive stands. With the AFL's recent spike in prominence – a TV contract with ESPN and a sexy new video game (see "Arena Football: Road to Glory") – a move toward an even faster, sleeker game makes sense.

Free-substitution aside, Schroeder says the AFL's pass-heavy playbook and truncated field make playing defensive line more enjoyable. The two-back system (a QB and fullback in the backfield) leaves Schroeder freer to rush the passer, like the days on the schoolyard. But there's no five-Mississippi rule here, just some genuinely huge and scary dudes colliding. "The field's a lot shorter, and I like that. I don't have to run that far; I come to an Arena game, and I think, 'This is easy.' ... I hate playing against the run."

It makes sense that guys Schroeder's size would feel comfortable in the AFL. If he lived 2,000 years ago, he'd still be in an arena; only instead of quarterbacks, they'd be throwing him Christians.

Mason joined the league in 1998, the same year Kurt Warner left the AFL for NFL Europe. One of the AFL's biggest success stories, QB Warner led his team, the Iowa Barnstormers, to the Arena Bowl both seasons he spent behind center, 1996 and 1997. After playing a season with the Amsterdam Admirals, he signed with the St. Louis Rams and became one of only a few players to win the NFL MVP and Super Bowl MVP in the same season.

Now say something if this starts getting eerie: Mason made Arena Bowl trips his first three seasons in the league, leading the team in tackles all three years and even setting a league record in 2000.

In case any NFL scouts missed the hits he was racking up, Mason remembers being featured in a magazine article titled "Diamonds in the Rough" the year Warner won the Super Bowl, an article about the most NFL-worthy players in the AFL. When friends called to tell him they saw him on a magazine cover, he started looking for bigger things. But his shot at Super Bowl MVP never came.

"We went to the Arena Bowl for the three years, and every time I talked to an NFL team, they would say, 'We know you're a really good player, but unfortunately the roster is already set for training camp.'" Every new season, he said, brought new excuses to keep him out of the big leagues. The New Orleans Saints under Mike Ditka were supposed to call Mason up in 2000, but Ditka never got the chance to hand Mason a jersey. He'd traded all the Saints' 1999 draft picks for UT running back Ricky Williams, and when Williams washed out, Iron Mike and his staff were fired.

Maybe the main difference between Warner's and Mason's careers is this: Warner throws passes, and Mason defends them. In the AFL, where 60- and 70-point games are common, the offense can hog the spotlight. In fact, Mason said, during his first few years in the league, some coaches didn't make specific game plans, or even practice plans, for defenses.

On March 24, Schroeder had the kind of game against the Nashville Kats that rookies have impure dreams about. He came about as close to winning a game as a lineman can, twice tipping the scoring exchange toward the Wranglers with a blocked extra point and a fumble recovery for a touchdown. The Kats came back in the end though, 63-70. When the opposing team scores 70 points, is anyone looking at the defense? 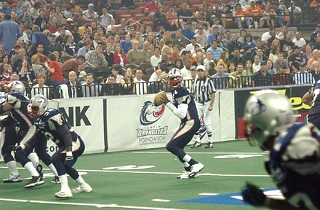 "They take [the scores] with a grain of salt. ... People know it's a high-scoring game. I think if you can produce and put up good numbers, you'll be noticed."

Mason, the only player in AFL history to log more than 800 tackles, seems to agree but adds that, for whatever reason, the NFL never gave him a real opportunity, and he gets a little upset when he hears teams complaining about the lack of good defenders or when he reads about failed experiments with moving college quarterbacks to coverage positions.

"Evidently they're not looking hard enough," he says. "I've been playing defense my whole life. ... I tackle and cover people in my sleep."

But whether or not the AFL's defenders get proper notice, Mason says, they can and do determine the outcome of the game. AFL games are typically high-scoring but usually pretty close. On April 2, for example, Austin managed a 45-38 overtime win against the New Orleans VooDoo, mainly with some solid fourth-and-goal defensive stops and a fumble recovery.

"In this league," Mason remarks, "the saying is, 'If you get at least one stop, we can lead.'

But this season, the team has apparently needed more than Mason playing well to win. With a 3-5 record, the Wranglers, who made the playoffs last year, are fighting a losing season. Under new coach Brian Partlow and new QB Adrian McPherson, the team's in an awkward adjustment phase, struggling with turnovers and broken plays. And unlike the lack of a legitimate NFL shot, the losing record is something Mason won't accept.

Winning is his job and his responsibility to the fans. "These people paid to come see you play," he says. "They deserve to see you give your best and to win."

But some of the Wranglers' most visible and vocal fans (read: face paint and choreographed dance routines) say they'll be back next year even if the Wranglers end with a disproportionately heavy "L" column.

Third-year season-ticket holder Matt "Guy in the Shiny Blue Top Hat and Matching Wig" Cross says he's disappointed in the season so far, but he'll buy season tickets as long as the team stays in town.

"Of course I'll be back next year," he says with a touch of near indignation, surprising from a guy with a metallic blue mop-top. "As a fan you've got to take the good with the bad." Unconditional love and acceptance: That's the Wacky Blue Top Hat Guy guarantee.

Cross, like many other season-ticket holders, tailgates in the parking lot before and after the games. Sometimes they're joined by actual Wranglers, one of the perks of being a hardcore fan in a smaller league.

Because of their accessibility, Mason calls AFL players "blue-collar athletes." Players and cheerleaders not only sign autographs on the field and at sports bars after the game, but also the AFL has to be one of the only major-league sports where the players make similar incomes to the average fans.

"People ask the difference between NFL and Arena," Mason points out. "One of the biggest differences is NFL players get paid millions; we get paid thousands."

Sharing hot dogs and tax brackets is one thing, but the league takes fan accessibility to an almost-uncalled-for level with the Manglers. Season-ticket holders of the screaming, face-painting ilk, the Manglers' semiofficial capacity with the team began three years ago as an April Fools' Day joke. In lieu of the expected halftime performance by the Lady Wranglers cheerleading squad, fans were treated to a sort of choreographed line dance by the paunchy, middle-aged, all-male Manglers.

For Mangler David Manchuca, this is exactly the sort of fan appreciation exclusive to the AFL. Get dragged-out and hog-snouted for a Redskins game, spend three hours sweating in a latex mask in the Cleveland Dawg Pound, and you won't be asked to take the field. In fact, they've got troops of guards trained to keep people like you off the field.

"If you dress up for an NFL game," Manchuca says, "all you're gonna do afterward is walk a mile to your car in the parking lot."

Catch the Wranglers in action this Sunday, May 6, 3pm at the Erwin Center vs. the Tampa Bay Storm. For tickets and more info, please see www.austinwranglers.com. 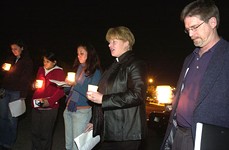