Ajax to clean up American soccer; and a football coup in Senegal

Tweet
print
write a letter
The Austin Lightning continue to improve, sweeping a home-and-away matchup with the DFW Tornados, 2-1 and 4-3, to move into a virtual tie for second in the PDL Midsouth. This week the Lightning host the El Paso Patriots, who may be the best PDL team in the country. The Lightning handed the Patriots their only loss of the season two weeks ago, in a brutal, four-expulsion, 4-2 upset. They'll be wanting revenge, Sat., June 25, 7:30pm at Williamson Co. Park, north of Highway 1431 and Sam Bass Road in Cedar Park, 512/386-6808. www.austinlightningsoccer.com.

Ajax America is conducting a series of National Training Schools across the country; players train with pros from European powerhouse Ajax Amsterdam: drills, classroom sessions, film studies, small-sided competitions, and full-sided games, designed to develop players mentally, physically, and culturally in the Dutch style of play. It's this Tue.-Sat., June 26-30, at St. Stephens School. To register, call 407/839-1982 or go to www.ajaxamerica.com.

In Copa Libertadores quarterfinal action, Chivas Guadalajara knocked out storied Boca Juniors, as fans in Buenos Aires threw missiles and stormed the field, forcing the game to be abandoned. Lost in the mayhem: Chivas thoroughly outplayed Boca and look like a real threat to become the first Mexican club to hoist the Latin American club title.

Senegal Minister of State and Sports Minister Youssoupha Ndiaye was fired this week, after the national team's 2-2 draw against Togo left Senegal trailing both Togo and Zambia in World Cup qualifying. With just two games left to play, the duties of sports minister have been taken over directly by Senegal Prime Minister Macky Sall. 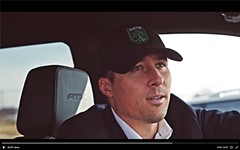