A Short History of Professional Baseball in Austin 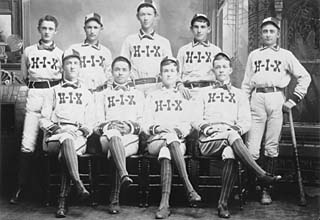 1839: The city of Austin is established as the capital of the Republic of Texas.

1869: Baseball debuts in Austin on June 29, when the U.S. 15th Infantry's team defeats a group of locals known as the Austin Unknowns, 31-28, in the first organized game.

1887: The Austin Hix, the city's first professional team, begins play. One year later, they merge with their competitors, the Austin Red Sox, to form the first Austin Senators, charter members of the present-day Texas League. They play at Riverside Park, just southeast of the Congress Avenue Bridge.

1914: The Austin Senators play their final season before a 50-year hiatus.

1920s: The Austin Black Senators join the Texas Negro League and play into the Forties. 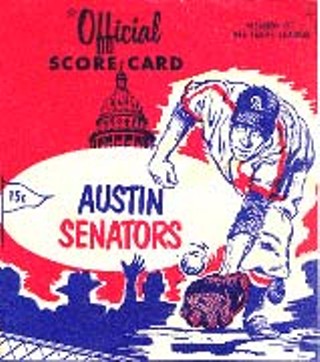 1930: Seguin native Smokey Joe Williams, then 44, strikes out 27 while one-hitting the Kansas City Monarchs over 12 innings to put the icing on his Hall of Fame career.

1947: 7UP bottler Ed Knebel finances construction of Disch Field and brings organized baseball back to Austin with his Class B Austin Pioneers.

1956: A year after the Pioneers fold, the Austin Senators begin another tour of duty in the Double A Texas League.

1961: Future Hall of Famer Phil Niekro goes 4-4 with a 2.63 ERA for the Senators, then an affiliate of the Atlanta Braves.

Baseball immortal Rogers Hornsby, considered by many the greatest second baseman of all time, is buried in his family's cemetery in Hornsby Bend, located off FM 989, the eastern extension of MLK Boulevard.

1967: The Texas League team, rechristened the Braves in 1964, relocates to Shreveport, La., leaving Austin barren of professional ball for the rest of the century.

1995: The Austin Swing strikes out when Austin voters defeat a proposal to fund a stadium, killing plans for the Double A team.

2000: Texas League baseball returns to the Austin area on April 16, the first home game for the Round Rock Express. The Express capture the league pennant.