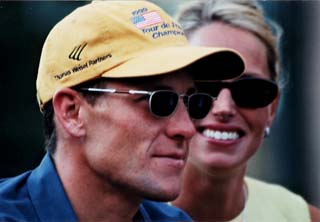 Consider 1999 the ultimate underdog. In the minds of many sports fans, 1999 was destined to be the big letdown. It never had a chance, really. Before 1999 was even a day old, its older, flashier sibling, 1998, was crowned the Best Sports Year Ever. And if that wasn't enough to live up to, 1999's place in time forced it to square off against an entire century's worth of legends and ghosts. It was a year that struggled for our attention while we were fixated on montages of grainy black-and-white images of the past, set to uplifting musical scores. How could any one year compete with our fin de siècle nostalgia? In the end, the 1999 year in sports carved its own niche. It was most dazzling when it played to its strengths, rather than simply copying '98s triumphs. For a few moments, sports like tennis, cycling, and soccer stole the spotlight -- if not the cash -- from football, basketball, baseball, and hockey. Talk about your surprises. Who would have guessed 20 women would become the year's most celebrated athletes? Or that Texas would be home to an NHL champion? Or that a cancer survivor would win one of the world's most grueling athletic events? Yes, 1999 was a sobering year, but it should hold his head high. The year gave us more than our fair share of memorable moments. And years from now, perhaps we will talk about where we were when:

1. Lance Armstrong Donned the Yellow Jersey. Austin's favorite son grabbed that famous jersey for the first time after winning the 6.8 kilometer Tour de France Prologue in 8 minutes, 2.5 seconds. Three weeks later, Armstrong was wearing yellow as he tore across the finish on the Champs-Elysées becoming the second U.S. resident ever to win cycling's most prestigious and most exhausting race.

2. Brandi Chastain Ripped Her Jersey Off. Before 90,185 fans -- the largest crowd ever to attend a women's sporting event -- the U.S. Women's World Cup team defeated China 5-4 on penalty kicks. It was the culmination of an extraordinary summer of soccer, in which the world's most popular sport exploded into the hearts and minds and consumer culture of the North American public, sans testosterone.

3. Ricky Williams Put on a Wedding Dress. He took plenty of heat for posing in a wedding dress with New Orleans Coach Mike Ditka for an ESPN the Magazine cover -- and that was just the beginning of Ricky's rough year. (Last month he was back on the cover of The Magazine talking about his "Season From Hell.") Sidelined by injuries, bombarded with criticism, and saddled with expectations, "Williams 1999" was not all he hoped it would be -- even his celebrated rushing record was broken by Wisconsin's Ron Dayne. It must have felt like a twilight zone year for Williams -- when was the last time an athlete took heat for not getting a big enough contract?

4. UConn Beat Duke. Sportswriters proclaimed the Duke Blue Devils the national champ before most of us had even filled out our NCAA tourney grids. But the Connecticut Huskies didn't follow the script. In the end, the two teams gave us one of the great college basketball championship battles. And the 77-74 Huskie victory gave us hope that the good guys sometimes win.

5. Serena Williams Won the U.S. Open. It wasn't the Williams-Williams final her father predicted, but 17-year-old Serena struck a blow for kid sisters everywhere, avenging her sister Venus Williams' loss to top-ranked Martina Hingis. But more importantly, Williams became the first black woman to win a grand slam title since Althea Gibson in 1958. And she did it with the fresh blend of power and style that reminded us all it's about time we had some new faces dominate the sports pages.

6. The Dallas Stars Won the Stanley Cup. It was a big year for Texas sports. The San Antonio Spurs were crowned NBA champs, the Houston Comets won their third WNBA title, the Houston Astros and the Texas Rangers both made the playoffs, and Ivan "Pudge" Rodriguez was named the American League MVP (though not without a fair dose of controversy). But the Stanley Cup in Texas was probably the oddest of 'em all. A bunch of guys with hard-to-read names shoving a puck across artificial ice in the middle of sweltering football country? Add to that the year's most controversial goal (was he in the crease?), and the Stars managed to win one for the Lone Star State while driving hockey purists up the wall.

7. Big Mac Hit Number 65 -- Again. Mark McGwire and Sammy Sosa became the first players to hit more than 60 dingers in consecutive seasons -- amazing feats. But round two of this home run derby hardly generated half the attention. In 1998, they were credited with saving baseball, but by 1999, the replay performance was cynically being cited in discussions of the game's watered-down pitching and juiced balls.

8. The Longhorns Came Up Short -- Again. It wasn't just football where the season didn't end the way it was supposed to. The women had two excellent teams earn top seeds for their NCAA regionals, only to get upset: The Christa Williams softball era ended at the hands of Chicago-Illinois (?!?), and the Erin Aldrich volleyball era ended here on the home court, against the Arizona team she left to come here. Both men's and women's basketball had promising teams that bombed in their NCAA openers, as well. And for two high-profile coaching hires -- baseball's Augie Garrido and women's soccer's Chris Petrucelli -- the promise never developed at all. Nor was the malady limited to UT. The Austin Ice Bats' stretch drive blew up amid league sanctions for salary cap violations, and even the trusty Westlake Chaps had a lousy playoffs and got bounced early. Here's to better endings for new beginnings.

9. 1999 Became a Year of Loss. While 1998 is hailed as the year when sports regained its luster, poor 1999 will likely be remembered as a year of loss. This was the year in which death, illness, and retirement seemed to dominate the sports pages more than any single player or team did. We wept for the death of Joe DiMaggio, Pee Wee Reese, Payne Stewart, Walter Payton, Kim Perrot, Catfish Hunter, and Wilt Chamberlain. Meanwhile, Michael Jordan, Steffi Graf, Wayne Gretzsky, and John Elway practically fell over each other rushing to exit their respective sports, rudely leaving 1999 to measure up to the past without the help of the sporting world's biggest icons.

10. The Texas A&M Bonfire Collapsed. The 90-year-old tradition built to fan the flames of rivalry before the big UT-A&M game each year turned into a tragedy this year. Twelve A&M students died, and 28 were injured while constructing the school's traditional 55-foot-high bonfire when the structure collapsed on November 18. What followed was a bizarre and moving debate over the role sports does and doesn't play in our lives. Should they have gone on with the gridiron battle, reminding us of what the students themselves so loved and looked forward to? Or is there a time and a place to say, in the end, it's only a game?

It was that kind of year.