Public Notice: Decision Day?
Best of luck to all of us this coming Tuesday
"...Artists in need of space: You can now participate in..."

Residence = Difference
A Stay at ArtPace in San Antonio Can Change an Artist
"...those who wait. For more than two years, Austin artists have been casting envious eyes toward San Antonio where..."

Musicians on How Best to Employ City Funds Earmarked for the Local Scene
$3 million in HOT funds are coming. Now what?
"...organization that's already given over $1 million to local artists since its inception four years ago. We could create..."

Beili Liu's Sculpture Cloud Pavilion Shimmers at Seaholm
How this glistening steel sculpture by the Austin-based artist became a permanent fixture of an evolving Downtown
"...the next 50 to 100 years. Made by Austin-based artist Beili Liu, the work offers a rare moment of..."

Christina Coleman at WEST 2017
The artist gives voice to the blackness in creation stories and personal histories
"...Local artist Christina Coleman has imagined her staffs of braided black..."

Universal Talent
From 1961 to 1992, Julioeloy Mesa worked in the Cuban Institute of Cinematic Industry and Art, making movie posters that earned international awards, exhibitions in museums, and even a permanent collection in the Library of Congress. Though he now lives comfortably in Austin, Texas, Mesa's artistic struggle continues.
"...The silver ghosts of film had enchanted the artist since boyhood. "I would take money from my mother's..."

Sarah Cook Invites Diners to "Be Here Now" at Kyoten Sushiko
An unlikely artist at Mueller's satellite iteration of Otto Phan's omakase restaurant
"...learned at Sway and help to develop the pastry program was something I was really excited to do," said..."

FronteraFest Schedule
"...audience into the creative and insecure working of an artist's brain...."

SXSW Creates XR Austin for Online Festival
Digital environment will be virtually like being there
"...a spectacular way,” said Blake Kammerdiener, XR and Film Programmer. “So we came together with Louis Cacciuttolo and his..."

Connecting a Whole Community
Austin and Google Fiber move to bridge the digital divide
"...a computer. We try to eliminate the barriers to access; by doing so, we help bridge not just the..."

How Austin's Queer Community Supports Its Own
Spotlighting the LGBTQ people and orgs looking after our health, youth, elders, and art
"...Ask Kathryn Gonzales, Out Youth's operations and program director, and she'll offer their "most conservative" estimate: 15,000...."

Postmarks
Balcones Responds
"...on the occasion of your paper beginning a recycling program with Balcones. May I quote? "After years of filing..."

Carrying the Burden
During Gov. Bush's campaign for his party's presidential nomination last fall, reporters asked the candidate to comment on a federal government report asserting that many Texans, including large numbers of children, were going to bed hungry. "I saw the report that children in Texas are going hungry. Where?" he demanded, going on to say, "You'd think the governor would have heard if there are pockets of hunger in Texas." Indeed, you would, especially if one of those pockets is just a few miles from his front door, Virginia B. Wood explains as she explores the very pockets of hunger in Austin Bush has difficulty fathoming.
"...Institute (FSI) at Tufts University, refers to the "assured access to enough food at all times for an active..."

The Arts Alive Institute: Reaching all learners with art
VSA Arts' Arts Alive Institute brings together artists and educators from across the state to discuss best practices for using the arts to reach everyone in the classroom
"...by the Texas branch of VSA Arts, a national program affiliated with the John F. Kennedy Center for the..."

The State of Trans Health Care
Gender affirming care in Austin is improving. But by how much? And how far must it still go?
"...mark on Austin's queer community. A well-known activist and artist, Westbrook fought to empower the transgender community at a..."

Postmarks
Our readers talk back.
"...So KUT is making some programming changes, and once again the Chronicle throws up all..."

SXSW Film: The Whole Enchilada
Red-hot and really long list of all the titles to date
"...still on the Midnighters, SXFantastic Features, and the Shorts programs – but see below for titles and descriptions of..."

Sacred Spaces and the Art of Margo Sawyer at AMOA
"...museum's second Art in Process exhibition, showcasing a local artist's work in the downstairs galleries while providing a Web..."

SXSW Film Goes Right to the Moon
Apollo 10 1/2, Sandra Bullock, and more join movie list
"...wins the opportunity to attend the franchise's educational immersion program in Italy, what she thought would be a romantic..."

Postmarks
Development peccadillos and Lost Austin kudos.
"...This development has been approved for Austin's Smart Housing Program that allows for a request for a 15% variance..."

Postmarks
"...by the regulated industries themselves), while offering pale appeasement programs that confuse and divide progressive activists, and soothe and..." 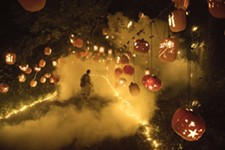