The future of physical media in Austin has come one step closer to being secured, and the success was something of a photo finish. In October, new nonprofit We Luv Video announced their intent to bring a community video store to Austin, using the media collection from the now-closed I Luv Video (read "We (Still) Luv Video," Culture, Oct. 28). During the final days of the crowdfunding campaign, organizers Macy Cotton and Ryan Teel watched as pledges from hundreds of backers flowed in, pushing the Kickstarter campaign across the finish line on Dec. 1 with a total of $112,494. "There, at the end, it was a huge community, word-of-mouth boost," Cotton explained. "It was really incredible to see."

Those connected to the Austin film scene know how tight-knit the community can be. Cotton said it was no surprise, then, that organizations like the Paramount Theatre and Austin Film Society also threw their weight behind the campaign, giving the We Luv Video team a much-needed boost in those final days. "We can't thank them enough for being able to work together like this," Cotton said, "and we really hope that we can continue working with them in the future, too."

The success of the campaign was a major relief for the We Luv Video team, while offering some welcome closure to former I Luv Video owner Conrad Bejarano. He's been searching for a permanent home for the 120,000 tapes and discs that make up the I Luv Video collection since the store closed in 2020, and that search is finally coming to an end. "He was really blown away by the reception," Cotton said. "I think this was just really reaffirming to him, that the community does really want something like this."

For now, after a few weeks of video vacation, the We Luv Video team hopes to wrap up their own search for a permanent storefront for the collection. The team has worked with local real estate agents to look at commercial venues all around town, but the duo hopes to honor the North Austin roots of the video store. Cotton said their search is focused on sites near the final I Luv Video location on Airport Boulevard as well as other central, walkable areas. "We're trying to stay open and listen to everybody," she added, "so if anybody knows of anywhere else, we're definitely receptive."

Those willing to donate their time in service of We Luv Video will also have no shortage of opportunities in the months ahead. Cotton and Teel have created a signup sheet for video store volunteers, but their more pressing need is Kickstarter fulfillment. "There are hundreds of stickers and socks that need to go out," Cotton explained, noting that she and Teel are hoping to gather some volunteers and partner with a few breweries to "put on a movie and everybody stuff some envelopes." The hardest part might be over, but the real work of running a community video store is just now beginning. 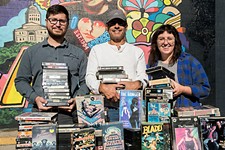