Hagins brings her horror-comedy home for Other Worlds Film Festival 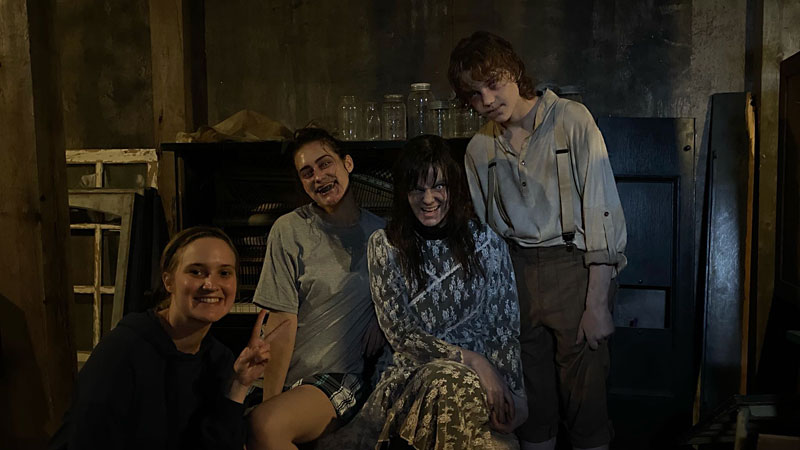 Like the elements required for an incantation, it seems like Emily Hagins has spent a long time collecting the components for her latest film: a friendly festival, a regular actor, a great production team, and a very special invisible cameo. They're all melded together in her new horror-comedy, Sorry About the Demon, which she called "a take on a haunted house but with a Forgetting Sarah Marshall-type setup."

Those ingredients are connected. In Sorry About the Demon, Jon Michael Simpson plays Will, a shiftless twentysomething who rents a surprisingly nice house when his girlfriend kicks him out. It has everything: great amenities, a huge kitchen, ghosts, and a slight case of demonic possession. Simpson previously starred in Hagins' 2018 South by Southwest-selected episodic series, Hold to Your Best Self, and as hapless slasher Mike Myers in "Cold Open," Hagins' segment of 2019 bloody laff-riot anthology Scare Package, which received its Austin premiere at Other Worlds Film Festival. Now Sorry About the Demon makes its U.S. premiere and hometown debut for Austinite Hagins at Other Worlds Film Festival 2022 as the first half of a double bill from Austin-based production company Paper Street Pictures with Scare Package II: Rad Chad's Revenge.

The idea behind Sorry, according to Hagins, is very simple: "What if someone had gone through a breakup and they end up moving into a haunted house, but they're just too sad to move out?" However, don't mistake Will for a pandemic shut-in, Hagins added. "He's isolated in his house ... So it feels very COVID-like, but I wrote this script about four years ago." Take Will's constant baking as a coping mechanism: While many people took to the kitchen during the lockdown, it's in Sorry About the Demon because Hagins was binging The Great British Bake Off while she was working on the script. "I really have to be careful about what I'm watching while I'm writing, because it becomes directly involved in whatever the story is."

However, the pandemic undoubtedly helped the film get made when it did. When she wrote it, "I just remember looking at my scripts and thinking, 'No one is going to want to make this project, it's too weird.'" However, once the pandemic hit and producers were looking for anything except "huge spectacles with hundreds of extras," it became the perfect for script for Paper Street. They already had a reputation for running COVID-free small-budget sets and had their eye on Hagins' script pre-pandemic. So after a call from Scare Package writer/producer Aaron B. Koontz, by end of the summer in 2021 Hagins was at a Holiday Inn in Toronto, Canada, filming her next feature. The producers had booked out the whole place: The cast and crew stayed in the rooms, and the atrium became the sound stage. "You'd roll out of bed, and you were on set," said Hagins. "It was really cool for an independent film to have that kind of immersive world."

But what about that invisible cameo? That would be Tony Vespe, star of Hagins' 2013 Halloween coming-of-age story Grow Up, Tony Phillips and now the voice of Deomonous, Will's hell-birthed roomie. On the set of Tony Phillips, Vespe would do an impression of the opening monologue from the old ABC animated series Gargoyles, and ever since, Hagins had been looking for an excuse to use it in a film. "It just added so much life to the demon, and it balances the horror and the comedy."

That's not the only connection to Tony Phillips. Hagins described that and Sorry About the Demon as "my most personal explorations of what it means to grow up and be who you are. When those two projects resonate with somebody I think, 'Oh, we must be kindred spirits.'"

Sorry About the Demon receives its U.S. premiere at Other Worlds Film Festival Sat., Dec. 3, 6:45pm.