Touching from a distance in There There 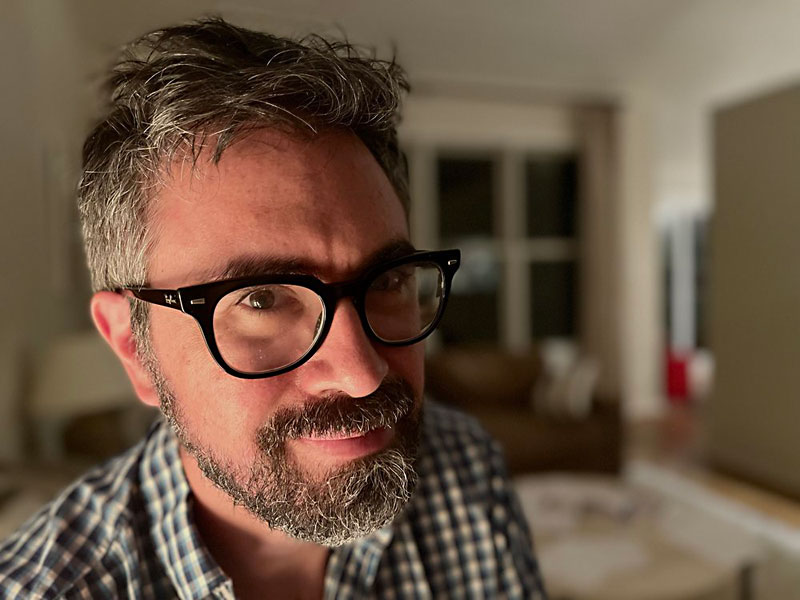 The pandemic isn't over, but everyone's finding new ways to live through it. Take Austin filmmaker Andrew Bujalski. "I'm starting to be a bit more cavalier," he said. "I was just walking around a coffee shop with no mask."

There haven't been many films about the pandemic – a subject that has seemingly made filmmakers squeamish. Yet even within that small catalog There There, the latest movie from Bujalski (Computer Chess, Support the Girls), stands out. Most others, like British horror Host or Peter Hedges' La Ronde-esque ensemble piece The Same Storm, explore how people found proxy connections through technology, through Zoom and FaceTime. In There There the characters are never onscreen together, and the audience must discern how they are sharing a space – virtually, or socially distanced across a coffee table or restaurant bar. The real secret is that there was no point in production where the actors were in the same space – or even the same city. "The chemistry is all movie magic," said Bujalski.

He described the Tribeca Film Festival-selected There There as "a screenplay that was devised for a very specific method of working." About three months into lockdown, film production became one of the first industries to come back, due to the use of heavily regulated bubbles on set. Big-budget movies are already pretty segregated on set, Bujalski noted, "and Hollywood just went, 'Let's throw another $10 [million] or $20 million and we're good to go.'" But, he added, "because I'm a lunatic" he started to think about the underlying concepts of cinema, and one idea stuck in his head. "Every time you edit, there's a lie that tells the truth. Maybe one actor who is gazing lovingly into another person's eyes, that actor went home hours ago. … Can I take the natural dissonances there and really pull them apart? Just like taking a piece of taffy and yanking it apart, so I'm making a much greater disconnection by literally isolating everybody."

Bujalski assembled a star-laden cast, including Lennie James, Lili Taylor, and Jason Schwartzman – but assembled is the wrong word. Each cast member recorded their half of their scenes in a state of splendid isolation, from wherever they were using an equipment package shipped to them in a padded Pelican case. There would be one technician in the room, and usually another actor reading the other character's lines ("We call them 'phantom cast'"), but everyone else – Bujalski, his longtime director of photography Matthias Grunsky, and the rest of the production team – were on Zoom. "It certainly wasn't conventional," the director said. "It was like eight microshoots. We'd do one performer at a time, figure out everything we needed to figure out for that person, and usually be in some phase of prep for the next person, whenever that was coming up."

From a technical point of view, There There was a completely fresh challenge for Bujalski, and he ended up with 80 hours of footage of raw performance ("by far the most I've ever had") to craft into a film by melding these disconnected monologues into dialogues. "It's a testament to what actors do," He said. "When I'm watching Lili Taylor and Lennie James in that first scene, it's like I'm watching Lili imagining Lennie, and then I can cut to her imagination."

So while There There was definitely born of the pandemic, Bujalski rejects the idea that it's about the pandemic, but instead about "strained intimacies. … About the feeling you can have at any time of standing in a room with somebody and wondering if you're in the same place at all."

There There is available on VOD now, and opens Fri., Nov. 25, 7:30pm at AFS Cinema, 6406 N. I-35, with director Andrew Bujalski in attendance for select screenings. Read our review.

Andrew Bujalski, There There, AFS Cinema