Taking a Bite Out of The Menu 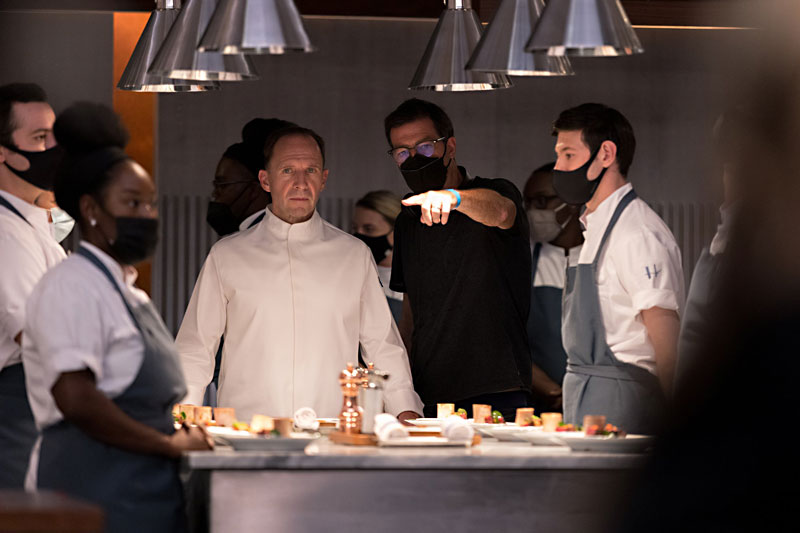 When did going out for dinner get so ... weird?

Recently, producer Betsy Koch went out to a high-end Los Angeles restaurant and was ushered into this strangely claustrophobic room. "There's a table and a banquette and you're backed in, and it really is voyeuristic and creepy. It's not really open – there's one window and you're just sitting there, staring – and they don't seem to care that you're there."

Those kinds of bizarre experiences are the meat of The Menu, a savage attack on the modern obsession with food as abstract art and status symbol. The script by Seth Reiss and Will Tracy draws its ingredients straight from William Burroughs' explanation of the title of his book, Naked Lunch: "a frozen moment when everyone sees what is on the end of every fork." The kinship is literal and metaphorical when Margot (Anya Taylor-Joy) and her foodie boyfriend, Tyler (Nicholas Hoult), manage to secure a reservation for the chichi island restaurant of Chef Slowik (Ralph Fiennes). They and the other guests soon discover that there's a lot more than just some amuse-bouches and foams on the menu. Koch described it as "looking at a restaurant that feels so high end but still impressive and taking that to absurdist extreme."

"But still keeping it authentic," added director Mark Mylod, and that's why the production worked with Dominique Crenn, America's only woman chef to have obtained three Michelin stars. She ran "a kitchen boot camp" with the cast to make sure the kitchen was run correctly "and worked with us and the script to design this menu that was just wonderful." Mylod described the food at her L.A. restaurant, Atelier Crenn, as "emotionally warm." By contrast, what she made for Slowik's table was "brilliant – but dead," capturing the bizarre "cold sensuality" of the modern dining experience.

The key ingredient to the film was the script, and like a seat at that hot new restaurant, when producers Betsy Koch and Adam McKay first read it everyone in Hollywood was buzzing about it. "So it kind of became about this derby to get this project," said Koch, adding sardonically, "and those things are always such fun to enter into."

Mylod credited the "beautiful writing" of Reiss (writing supervisor for Late Night With Seth Meyers) and Tracy (who already worked with both Koch and Mylod on Succession) for "that barbed tone where it's so sharp, and it has that beautiful symbiotic relationship between the tension, the genre element of it, and the comedy."

Yet The Menu isn't just about chefs and restaturants and what Mylod called the "quasi-religious status" they have achieved, but about how everyone seems to have become a culinary expert. The once-isolated world of the kitchen has now become like a trip to the zoo, with the staff on permanent display for gawking diners. That thinking has seeped into architecture, Mylod noted: "The area I live in in Brooklyn, 20 years ago, 30 years ago, everybody had this scullery-type kitchen and walled off the shame of seeing the servants and their dirty work. Now everyone has to have an open-plan kitchen, so it's all out there on show. Food is a visual medium now."

The Menu is in cinemas now. Read our review.