Noah Segan Is Dad and Loving It in Blood Relatives

The actor and filmmaker on Judaism, vampires, and cool cars Vampires drink blood. They fear sunlight. But do they schvitz?

That's a question answered in Blood Relatives, the new horror-comedy from writer/director/star Noah Segan. In it he plays Francis, a Jewish vampire traveling the American back roads who discovers he's father to a half-human daughter, Jane (Victoria Moroles), who wants to know her absent dad. What she finds is a very old vampire who looks like a thirtysomething man who dresses like he just came out of a screening of Rebel Without a Cause. "That's such a dad move," said Segan. "'I bought these jeans 20 years ago and they were cool. What do you mean they're not cool anymore?'"

Segan said he was as much influenced by family-centric stories like Paper Moon and Raising Arizona as he was by grimy bloodsucker flicks like Habit, The Addiction – and, of course, Southern-fried classic Near Dark. He described Francis as thinking he was like Bill Paxton as shitkicking redneck vamp Severen, "swaggering around, causing all kinds of trouble, and thinking I was Mr. Cool Guy, and all of a sudden I wake up and it's Dracula: Dead and Loving It." Unlike many undead movies, Blood Relatives is all heart, "with some sincerity, some earnestness, some dad jokes." Dad jokes? Absolutely, said Segan. "The nature of a dad joke in general is that it's really honest. It wears its heart on its sleeve, and that's what I'm asking from folks who watch the movie – to let down their guard a little bit, because there's not much cynicism in this movie."

For much of the film it's just Francis, Jane, and of course Francis' cherry 1969 Barracuda Fastback with a 383 in Blue Fire, currently parked in Segan's garage/office. A gift from his friend and mentor, cinematographer Tom Richmond (Slums of Beverly Hills, Chopping Mall, I'm Gonna Git You Sucka), Segan called it "a totem of joy and family and connectedness, so it only made sense to put it in the movie." The car got a road trip of its own for filming – to Taylor, Texas. He credited local producer Aaron Koontz for convincing him to shoot there, not least because it meant he could roam the Southwest by only turning the camera around. "You could be on one side of the road and it would be forest, and you could be on the other side of the road and it would be desert, and when you're making a road trip movie in a pandemic and you can't go to eight different states, you can go to Central Texas, folks."

Wherever he filmed, Francis' experience as a migrant European Jew was making the trip. As a fifth-generation New York Jew ("and I'm not even that Jewish. I don't practice the religion very much or very well"), Blood Relatives was Segan's way to explore his own heritage through Francis, hiding his trauma beneath a leather jacket. "He thinks that makes him OK, but he never moved past it. He just put on the costume and thinks, 'Well, that fixes it.'" Plus, Segan added, "I thought it would just be funny to have this old Jewish man in the body of someone who thinks they're really cool."

At the same time, Segan clearly feels a little pride about kicking back at the modern, often very nebbish depictions of Jews onscreen. He said, "We forget there was a time when James Caan and Elliot Gould and Albert Brooks were sex symbols. These guys were movie stars and they were unabashedly Jewish. ... Maybe what I can contribute is that maybe I do have a little bit of swagger, and I'm a Jew – but it ended up being a little silly." 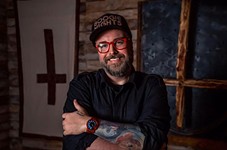