The Beast and the Bone Collector in Rondo and Bob

Joe O'Connell brings together two horror icons in his documentary, on VOD now 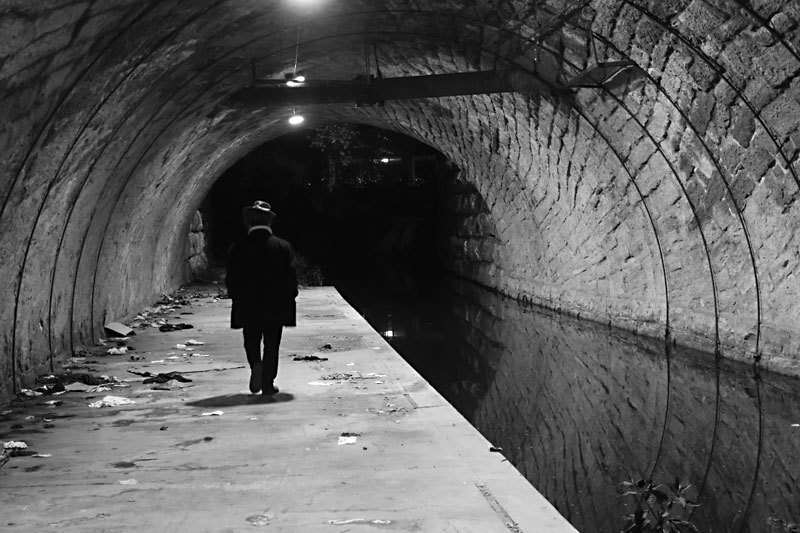 If you ask Austin author and filmmaker Joe O'Connell what's on his mind, it seems it's the wisdom of Guy Clark, the Dean of Texas Songwriters: "By the time people are talking about your work, you should be doing something else." Right now, he's working with the Book Project, out of Denver's Lighthouse Writers Workshop, on a second draft of his upcoming book, The Contortionists, about the Ross Sisters. The loose-limbed singing triplets from West Texas will be familiar to Alamo Drafthouse veterans from the clip of their body-twisting act in 1944's Broadway Rhythm that was a regular part of pre-shows at the old Alamo on Colorado. "So my mind is on a totally different thing," O'Connell said.

Different to what? To Rondo and Bob, his documentary tribute to the interwoven stories of two men who never met each other. Rondo Hatton was a horror legend: a college football player, veteran, and reporter whose body was shaped and reformed by his acromegaly to the point that 1940s Hollywood saw him as the perfect monstrous heavy. Texas native Bob Burns had his own impact on cinema, as the art director who made The Hills Have Eyes, Re-Animator, From Beyond, and, above all else, The Texas Chain Saw Massacre. O'Connell's documentary about their seemingly disconnected lives has spent the last two years on the festival circuit. "In some way you get addicted to it," O'Connell said, and it's still haunting Europe's screens. However, Rondo and Bob is now available on VOD in the U.S. and Canada.

The two years of festival tours are nothing compared to the 22 years that the story of Burns, and his obsession with Hatton as a man and performer, has been part of O'Connell's life. In 2000, when he was a film columnist for the Austin American-Statesman, he met Burns under the most surprising of circumstances: "He was a serial blood donor," O'Connell recalled, "and he had reached the 5-gallon level. So there was a big event at the blood center on Lamar, and the posters of various movies he had worked on were up on the walls." Their mutual friend, stuntman Gary Kemp (about whom O'Connell would later make the documentary Danger God) introduced them, and they chatted for a while. "As I was leaving, he handed me a copy of his script, called Rondo and Mae, the love story that he'd written about Rondo Hatton and his wife."

Burns died in 2004 before he ever got to make that film, so Rondo and Bob is in some ways a fulfillment of his dream to show the world the man behind the vast brow and killer hands, the sensitive man who found true love with Mabel "Mae" Housh, the no-nonsense seamstress who saw past the camera-ready looks that made him famous but pigeonholed him in beastly roles. But it's also about Burns, his undiagnosed dissociative disorder, his meticulous researching and archiving of minutiae about Hatton's life ("I think he would have made a great librarian") and his legacy on horror design. O'Connell referred to "his sole philosophy of the art director not being present, but the art direction freaking you out. … He'd hate it when people would say, 'Oh, great art direction.' They should just be afraid."

But while his subjects may have sent audiences screaming, that's not O'Connell's intent at all. With both Rondo and Bob and The Contortionists, he said, "I'm just interested in telling very human stories."

Rondo and Bob is available on VOD now. Read our review at austinchronicle.com/screens.

OOPS! This story has been corrected to give the right attribution of the quote to Guy Clark.

A version of this article appeared in print on June 24, 2022 with the headline: The Beast and the Bone Collector