Richard Linklater's Memories of the Moon in Apollo 10½ 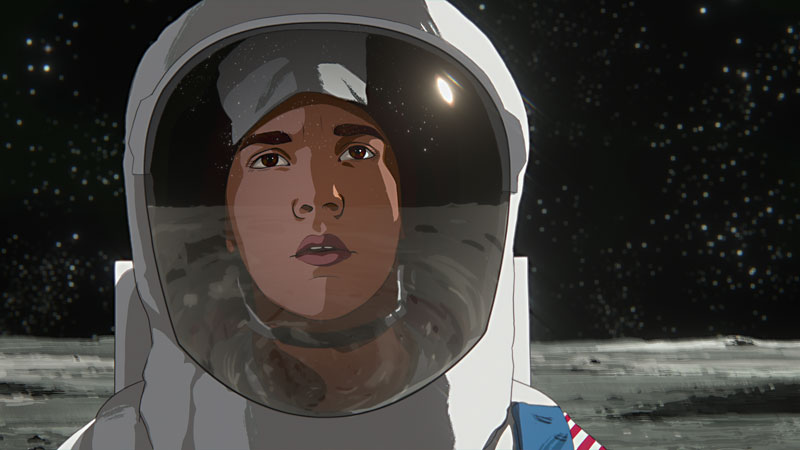 How do you get to the moon? Well, first, you have to decide to go. Richard Linklater may be best known for his ambitious and often experimental live-action films like Slacker and Boyhood, but he's also pushed boundaries as an animation director with Waking Life and A Scanner Darkly. Now his third animated feature, Apollo 10½: A Space Age Childhood, pushes the limits of character animation. An evolution of rotoscoping, using live-action footage as reference, it places the audience in the subjective viewpoint of a young boy gazing up as rockets head into space. Yet what Linklater first proposed was a much more concrete re-creation of space race-era Houston.

“[Animation] pulls you into a dream state, memory state in the construct part of your brain.” – Richard Linklater

Producer Mike Blizzard recalled that Linklater first mentioned the idea of making a period live-action drama at an Austin Film Society board dinner. He wanted to tell a story "about Houston and growing up there, and what a trip it was to be around astronauts and think it was normal." A few months later they met up again; they were both at an AFS board meeting, "and [Linklater] turns to me and goes, 'I want to make this movie about a kid growing up in Houston in 1969, and he imagines he's the one who goes to moon.' I go, 'I'd be down with that,' and we went and got veggie food at the Mongolian BBQ."

That was 2012. Film production is notoriously slow, and even with the surprise critical and box office success of Boyhood elevating Linklater's star to new levels, it was still slow going. In 2017, the team put out a call for reference material, asking anyone with old photos or footage of Houston in the Sixties. Blizzard said, "We had the idea that we could use that as establishing shots, to have these dreamy home movies that would be playing as he's going to Astroworld, and then cut in really close to [Stan]."

But something was off. "Aesthetically," Linklater said, "it wasn't quite working." Moreover, any attempt to accurately re-create the time and the places, "it would have been $100 million, and no one was going to give me $100 million to make this film."

It was actually Toby Halbrooks, longtime producer for David Lowery (The Green Knight, A Ghost Story), who first proposed pivoting to animation. When he made the suggestion at an AFS intensive retreat at Linklater's Bastrop studio in 2019, that changed the trajectory of the film. Linklater explained, "The same thing happened 20-plus years ago with Waking Life. 'The film I'm making in my head doesn't quite work.' And then when it's animated, it's, 'Oh, it works.'" With Apollo, "it's such a weird fantasy-reality mash-up that the literalness of live action I don't think helps it. It engages your rational brain, where you'd go, 'Wait, are they saying this is real?' Whereas this, it pulls you into a dream state, memory state in the construct part of your brain."

For producer Tommy Pallotta, who worked with Linklater on both Waking Life and A Scanner Darkly, the unifying factor in Linklater's animated films is how they draw the audience into the character's viewpoint. "Everybody makes their own movies in their head," he said. "[Apollo] is a young person's perspective, told by the adult version of that person 50 years later looking back, so it's really about memory and perception, and it's incredibly subjective. I think that Rick intuitively understood that's sort of how Waking Life and Scanner Darkly worked as well."

About a decade ago, Linklater and Pallotta were developing a remake of The Incredible Mr. Limpet: Previously adapted from Theodore Pratt's novel in 1964 as a family-comedy vehicle for Don Knots, the new environmentally centered version would star Zach Galifianakis as the man who becomes a fish. Linklater said, "We got some R&D money from [Warner Bros.] to play around with it, and Tommy had been starting to use painted backgrounds, so I thought, 'Oh, we'll just paint the ocean.'" Going through that experience "gave me the confidence [that] there were new possibilities out there."

With the switch from live action to cartoon, Linklater reached out to Netflix Animation, who were quickly onboard. Next, he started shopping for animation houses. For his first two animated features he'd effectively assembled his own studios, with many first-time animators. Linklater said, "When [programmer and filmmaker] Bob Sabiston was writing that software, he thought of it as just a new way to paint," and so there's a generation of Austin artists with only one IMDb credit, as an animator on either Waking Life or Scanner. However, while he wanted the same level of character realism that he had achieved with Scanner, he felt that he'd gone as far as he could with that look, "and the demands of something like this and our environment were such that it needed top-shelf professional animators and compositors."

So Linklater started shopping around for different studios with different styles and techniques, with even stop-motion and puppetry being discussed. Then, a giant leap. Blizzard recalled, "Rick called me one day and said, 'Have you seen Undone?'" In hindsight, what was to come seems inevitable. The 2019 Amazon Prime series, starring Rosa Salazar, was produced by Pallotta, used similar character animation techniques to Linklater's animated movies, and was being drawn by Amsterdam's Submarine and Austin's Minnow Mountain – the latter co-founded by Craig Staggs, who learned character animation as part of the art team on A Scanner Darkly. At the start of January 2020, Netflix approved the budget, Blizzard said, "and within just a few months, we were shooting."

The project was a natural fit for Pallotta, who'd worked with both Staggs and Submarine for over a decade and had talked with Linklater about Apollo from back in its live-action days. A Houstonian and former elementary classmate of Linklater's, Pallotta said, "My neighbors were the astronauts and the engineers, as well as the cowboys, so of course I wanted to be involved, but I never presumed."

The Minnow Mountain team was also more than ready. Staggs said, "I don't think that it's a secret that a Linklater movie was one of the goals when we started. Where we are, working in rotoscope, to be in the position that when he decided he wanted to make one ... we could be the team to do it."

“Twenty years ago, I moved here hoping I’d get to work on a Linklater movie.” – Steph Swope

"Actual literal dream come true," said Minnow co-founder and Producer of Animation Steph Swope. "Twenty years ago, I moved here hoping I'd get to work on a Linklater movie. It's magical."

But before the animators could take over, Linklater had to shoot the live-action reference material from which they could (quite literally) draw, and this is where the team got really lucky. Shifting to animation meant filming on a green screen soundstage, and Austin Film Commission Director Brian Gannon suggested using Robert Rodriguez's Troublemaker Studios. "They said, 'Yes, we'd love to have you,'" Blizzard recalled, "'but we have this annual South by Southwest party, and so you have to be out before that party.'"

Linklater added, "I remember telling Bruce Curtis, our production designer, 'Good news, bad news. We just have to design the world. There won't be set construction. The bad news? We shoot in six weeks.'"

Knowing that the animation phase would almost "be like reshooting the movie" when it came to issues like lighting allowed Linklater to concentrate on the performance side. He said, "The filmmaking process felt like you were filming a fun rehearsal. ... I wouldn't direct an actor any differently. I wouldn't say, 'You're an animated character, so act differently.' I did that a little bit on Scanner because that was a bit more drugged-out weird, but this was realism." The performances could be loose, but the actual filming needed to be precise. "Every shot we did was a special effect, and all the specificity of getting that just right. 'If the actor walks there, then they're walking through a car. Cut, do that again.'"

The live shoot wrapped on March 8. Five days later, March 13, 2020, the entire film industry went into COVID lockdown, and the Minnow Mountain team was only just done loading the reference footage on their servers when they had to pack their computers to start working from home. Not only that, said Swope, but Undone season 2 had also gone into production, "so we started the movie and season 2 within a week of each other." Luckily, because they could hire animators from around the world to work remotely, it was surprisingly easy to crew up both projects at the same time. Plus, they'd already done Undone season 1 with Submarine, "so we really had a good working relationship."

"Everybody did a great job of communicating," Linklater said, "because we didn't have the time or the budget to lose."

In the division of labor between Minnow Mountain and Submarine, the Austin studio handled character design and line work, archival media footage ("Any time you're watching cinema," Staggs said, "you're watching frame-by-frame rotoscoping"), and, in the later stages of production, background work to flesh out the world. However, before that, they had to home in on the style and look of the film, to make it like that elusive vision in Linklater's head. Staggs said, "We started looking at period palettes, Kodachrome photography, and then starting to look at editorial illustrations from 1969. That sort of stuff became the jumping-off point." The footage collected in 2017 for the live-action montage version became reference material (per Blizzard, "A lot of that footage of [Stan] training, for instance, that's NASA footage"). The Texas animators also became a resource for Submarine on small specifics, "like the color of the water at Galveston," said Staggs, "and I remember explaining that 100% of the rocks at Astroworld were Styrofoam." After all, this wasn't just any abstract version of Texas in the late Sixties. Linklater's idea was of a particular time, a specific moment, down to having the right commercials running during the right TV shows at historic moments. That's what made this the accurate version of Houston distorted through the lens of memory that Linklater wanted all along. He said, "It was kind of fun to create it the way we did, from archival footage and photographs, and to see animators build it out in these environments, 2D and 3D. In a way, it was even more satisfying seeing it coming to life."

Apollo 10½: A Space Age Childhood opens in theatres March 25, and blasts off onto Netflix April 1.