The Lifesaving Cooking of Chef José Andrés in We Feed People 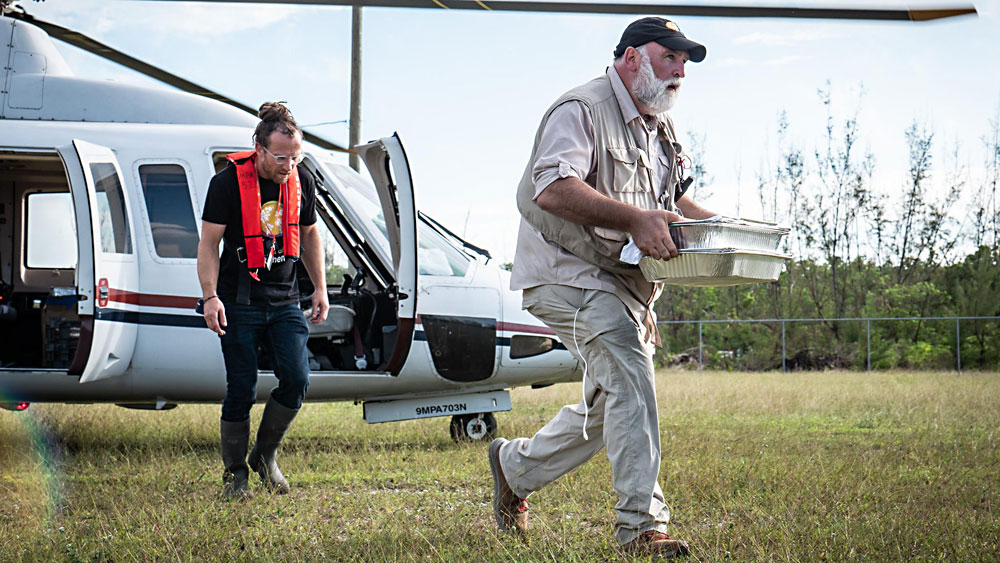 José Andrés in We Feed People (Courtesy of National Geographic)

We Feed People begins with a thunderclap, followed by grim shots of cars, homes, and farmland underwater in the aftermath of Hurricane Florence in 2018. Into the scene strides the familiar profile of chef José Andrés, the Spanish celebrity chef-turned-Batman of disaster relief. As chief feeding officer of his NGO, World Central Kitchen, Andrés has one job when he arrives at the site of hurricanes, volcanoes, earthquakes, freezes, and fires: feed people.

The National Geographic documentary, which debuts at South by Southwest, follows Andrés as he spearheads operations after natural disasters in Puerto Rico, Guatemala, the Navajo Nation, and California during COVID. In depicting these activations, director Ron Howard pulls subtly at several narrative threads while keeping Andrés and his aggressive empathy at the center. “I didn’t want to do a biography of José Andrés,” Howard said. “But I was fascinated by what had been created in such a short period of time and what it was like to be a part of something that was so active and so dynamic. It was just maverick enough that I thought it was inspiring and interesting. This is the story of the growth of an organization; you see it from the beginning when it’s just him and his will and his credit card.”

“We put more pressure on the poor of the world to fight climate change than on the rich.” – José Andrés

Part of the need for the rapid expansion of World Central Kitchen over the past decade is the documentary’s uncredited co-star: climate change. “We used to respond to one [Category 5 hurricane] every few years,” said Andrés. “Now we respond to hurricanes, and fires, and tornadoes. Right now, we feel we are more responders to climate change and bringing relief. But in a way this gives us a lot of credibility to talk about why we need to fight climate change.”

In Guatemala, as WCK helps villagers fill their bellies and get back on their feet after a volcano wreaks havoc, we see the organization equipping the survivors with kitchen equipment, including propane cooktops to reduce reliance on biomass fuels, and water lines and sinks for ease in washing up.

“Sometimes I am very upset that we put more pressure on the poor of the world to fight climate change than on the rich of the world to fight climate change,” Andrés continued. “But I’ve spent 15, 20 years of my life learning about how 3 billion people use fossil fuels to feed themselves, and in the process, they are becoming poorer just [for] how they feed themselves.” Procuring the materials to prepare the food often expends more energy than the meal itself will provide; when Andrés says in the film, “We create systems,” this is, in part, what he means.

The other systems Andrés and WCK create, as demonstrated in the film, are of mutual aid and volunteering, from mobilizing armies of food trucks to help cook for and serve the displaced and hungry, to inspiring community members to step up and help care for their brethren. In disasters like these, Howard explained, “the people who seem to grow and move forward are the people who would go in and get involved. It’s one of the things that I saw in the World Central Kitchen story.”

Says Andrés about what drives him to keep doing this grueling, yet soul-affirming, work, “I always say that the only way I’m gonna take care of my daughters is not putting them behind walls but building longer tables. But I fight as well to provide for the daughters of other people I don’t know.”