Heavy hangs the crown In the Court of the Crimson King 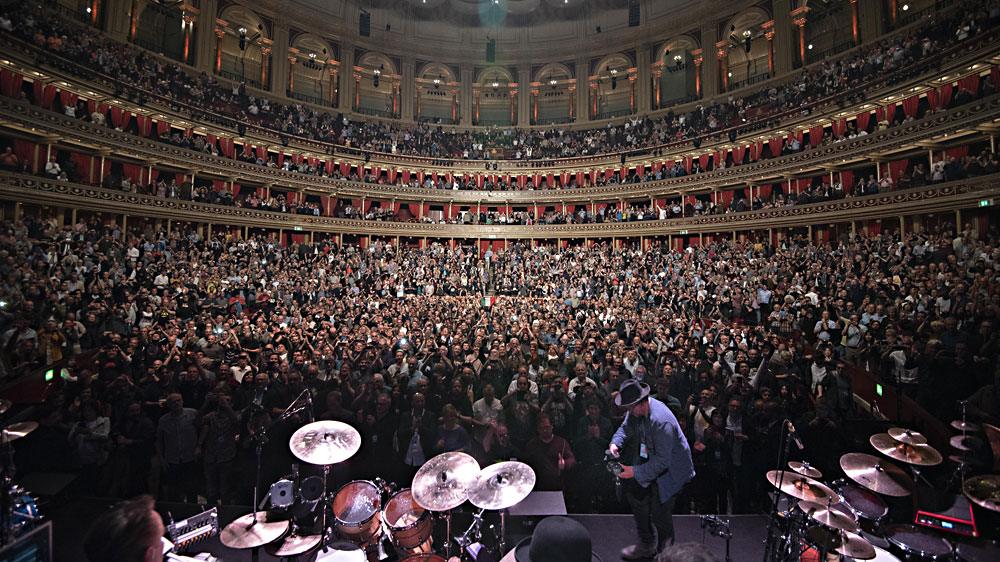 A few minutes into talking to Toby Amies, director of the hotly-anticipated-by-its-core-audience In the Court of the Crimson King, I mention something about a particular performance in the movie, which chronicles the legendary rock band King Crimson’s 50th anniversary tour.

Amies responded with a question: “Oh! Are you a fan?”

Me: Well, I come out of a more punk thing and prog rock was the enemy but later in life I got much more into certain things about them and their performance at Bass Concert Hall in 2017 was just stunning so –

“Yeah, whenever I ask someone that,” he said, “there’s often a lot of equivocation and clarification. Which is totally understandable given the subject.”

“One of the most punk things that King Crimson did was become this completely autonomous business organization.” – Toby Amies

Indeed. As the documentary shows, King Crimson fans are a famously devout bunch, deeply in love with possibilities presented in Crimson’s music. It’s clearly not quite like being a Deadhead but at least one fan uses the term “a cult.” (Or was it “occult”?) Amies talks to a bunch of them, including a woman who adores bassist Tony Levin; a guy who once got chucked from a show for an ill-conceived photograph; and an impossibly cool Norwegian nun. “You know how in most music docs,” Amies said, “the director wheels on an external authority to fill in gaps or tell you rather than show you why the band matters? She was that for us. She had real insight in terms of the spiritual element of Crimson.”

Amies didn’t start as a Crimson fan, either. He spent some college years in America soaking up bands such as Beat Happening and Nation of Ulysses before hosting MTV UK’s version of Alternative Nation. He eventually wandered behind the camera, directing (his first feature, The Man Whose Head Exploded, debuted in 2013) and producing various commissions for the Tate and others. Around Christmas 2018, he was approached by Crimson king/lead guitarist/sole constant Robert Fripp, a neighbor of Amies’ parents whom he’d gotten to know over the years, to create a document of the band’s 50th anniversary tour. “I was just about a legit filmmaker at the time,” he says. “Robert put a lot of faith in me.”

As a result, Amies had remarkable access to all eight members of the 2019 lineup, as well as former members whose time with the famously precise group range from good humor to guilt to something approaching PTSD (guitarist/onetime co-songwriter Adrian Belew, the extremely funny Bill Bruford, and poor Trey Gunn, who compares being in the band to “having a low-grade infection: You’re not really sick but you don’t feel well either”).

The center, of course, is the dapper, dry, and disciplined Fripp, who since 1969 has been the red giant around which the Crimson planets orbit. Easily one of the greatest English-speaking rock guitar players who ever lived, he’s gained a reputation as a tough taskmaster (he even describes himself as a “disagreeable person”) who presided over seemingly endless iterations of a band with a my-way-or-the-highway attitude. Amies takes issue, gingerly, with this idea. “As [Crimson co-founder] Michale Giles says, King Crimson is Fripp’s baby but he needs lots of midwives. What makes Crimson is Fripp plus other people, and the band is at its best when the tension between Fripp and what other people want is well balanced.” Politely said!

Perhaps the film’s other primary figure is American multi-instrumentalist William Rieflin, who died in 2020 of advanced colon cancer. Best known as a drummer for Ministry, Revolting Cocks, Pigface, KMFDM, and R.E.M., Rieflin pledged loyalty as a drummer in 2013 before eventually moving to keyboards. Amies filmed Rieflin near the end of his life, a responsibility Amies took extremely seriously. “It’s very rare to meet someone who is capable of standing outside of what they do and observing it while also being completely present,” Amies said. “Bill could do that.”

Fripp calls Rieflin “the only personal friend who ever joined King Crimson” and notes that he trusted Rieflin musically. Amies argues that Fripp was just as punk as Rieflin. “Except for maybe Crass, English punk wasn’t self-sustaining the way American punk was,” he said. “In America, you had all-ages shows, low-priced records, and this very direct relationship with the audience. One of the most punk things that King Crimson did was become this completely autonomous business organization and build a relationship with the audience that seems mutually beneficial.

“And Fripp played with the Damned.”

The Most Memorable Moments of Levitation’s Thursday and Friday
King Gizzard, Godspeed You!, and more lengthy band names